It's best to expect the unexpected from SHeDAISY. These three young women push musical boundaries as hard as they push themselves -- and the result is "The Whole Shebang," a debut CD as fresh as it is impressive. "Sometimes we sit down and say, 'What's the weirdest harmony we can sing here that will work?'" says Kristyn Osborn, the oldest of the three sisters who make up the trio. It's an approach that makes for some of the most scintillating harmonies in country or any other genre of music, and it's one that permeates everything they do. Rest assured, there is nothing ordinary about their manner of music.

"The Whole Shebang" embraces all the possibilities of present-day country, from walking down classic country lanes to roaring down turbo-charged highways. The former extreme is exemplified by "This Woman Needs," an in-the-pocket waltz providing a sketch of love that is both poignant and achingly real. The latter is illustrated in "Cause I Like It That Way," which pushes attitude with a capital "A" over the top. In between are "Still Holding Out for You," a slow, sad look at lost love; "Little Good-Byes," with its infectious enthusiasm and arresting harmonies; and "Dancing with Angels," a sweet and soaring look at love's possibilities. SHeDAISY casts as wide a net as any popular country act when it comes to subject matter, but the collection is held firmly together by the songs' slice-of-life reality and the group's collective personality.

"We have tough songs, sarcastic songs, soft songs, and gentle songs," says Kristyn. "We cover the gamut. But we can honestly say they come from true, real feelings." Kristyn is SHeDAISY's songwriting force; she wrote or cowrote every song on the record. Influenced by an eclectic assortment of writers, including Stephen Sondheim, Mike Reid, and Sting, she writes songs that are as inventive as the harmonies they inspire. And SHeDAISY is living proof that when it comes to three-part harmonies, it hasn't all been done: Kristyn, Kelsi, and Kassidy are seldom predictable when looking for the combination of their voices that best sets off the mood of each song. "We did a lot of groundwork and we saved ourselves a lot of time when it came to recording because we were so careful about our demos," says Kristyn.

This method asked a great deal of the team headed by producer Dann Huff. "Dann was definitely the right producer for us," Kristyn says. "He took our outlines and just took the whole thing to another level." The CD brings the punch of the best of today's pop and rock to a country sound that pushes both lyrical and sonic envelopes. The result -- adventuresome, freewheeling, and richly textured -- is pure SHeDAISY.

In fact, it was a challenge for singers, producer, and engineer alike to best present songs like "Little Good-Byes," where the "background" vocals come into the forefront on the chorus, and "Before Me and You," where the vocals weave seamlessly in and out of each other. "We didn't have anybody telling us You can't do this and You can't do that," says Kassidy. "We had a lot of freedom. That was the cool part about it." That sense of freedom and exploration carried over even into promotions for SHeDAISY's debut. In a pioneering move, Lyric Street Records offered an alternative to the traditional radio tour, where artists visit local radio stations and do acoustic performances often in conference rooms over pizza. The label instead introduced SHeDAISY to radio in a 35mm film documentary, privatly screened in local theaters.

An in-depth personal and musical look at the trio, the film was directed by David Hogan, whose credits include "Aliens III," "Batman Forever," and "Barbed Wire," and whose video direction credits include stints with Shania Twain, Sheryl Crow, Melisssa Etherdige, and Billy Joel. Kristyn, Kelsi, and Kassidy Osborn are the children of a small-businessman and a housewife. They were raised near Magna, Utah, a town outside Salt Lake City that is, according to Kassidy, "a great place to grow up." "It's a town where there are more big trucks and Wranglers and hats and belt buckles than you have ever seen," adds Kristyn. "It's a rodeo town, and that's what a lot of our friends were into."

The sisters discovered their interest in music early on, and much of that love came from time spent in the family car. "We're what we call a Disneyland family," says Kristyn. "We'd take a yearly vacation to Disneyland in a station wagon with wood paneling, and you had my parents' eight-track playing. It was either show tunes, classical music, the Beatles, or the Beach Boys, except every now and then we'd get Steppenwolf, because that was my dad's thing." Their mother taught them to sing harmony singing to those records, and all those styles of music became part of their musical lives. When she was 12, Kristyn went to an Alabama concert and bought a Restless Heart album, and country music began staking its claim on all three girls. It was Kelsi, though, who was the pioneer performer among them.

"I have a picture of me at three with my first microphone and a little speaker," she says. "I started taking vocal lessons not long after that." People in their neighborhood still talk about buying tickets for the shows the young girls put on in the neighborhood. "We made little bags of popcorn and had punch and sold tickets," says Kelsi. "It was really something." Later she and Kassidy began singing duets at places like retirement homes and country fairs, usually accompanied by "a third-generation karaoke tape," according to Kassidy. "It was really cool to earn 20 bucks at that age by singing," says Kelsi.

By the time Kristyn graduated from high school, she saw that her sisters had something worth joining and the trio was complete. What began as a theme variety show featuring all kinds of music and using costumes sewn by the girls' mother eventually consisted solely of country music with soaring three-part harmonies. They played gigs in the Salt Lake City area and throughout the western U.S., and even sang the national anthem at Utah Jazz NBA games. But they soon moved to Nashville -- at first only for summers and returning home for school, then full-time to pursue a record deal. "We felt like we really had something," says Kelsi, "and that we had a dream worth pursuing." "We figured there was a void we could fit in," adds Kassidy. "Of course, when we first came, "female" wasn't big, "groups" weren't big, and "young" wasn't big, and the feedback was that Nashville wasn't really ready for us." "But we came anyway," says Kristyn.

Sharing one car, they worked similar shifts at three different department stores at Nashville's Hickory Hollow Mall, using the bulk of their time to record and play showcases. After several years of false starts, disappointments, and struggles, SHeDAISY finally hit on the sound, songs, and support team that led them to Lyric Street Records. "Actually, I'm not certain who gave the label our tape," says Kristyn. "But they really liked it. Lyric Street director of A&R Shelby Kennedy brought us over and we sang 'Little Good-Byes' live in his office. Then he slipped out and brought back senior VP of A&R Doug Howard and asked us to sing it again. They brought us back the next day and we played for label president Randy Goodman and senior VP of promotion & product development Carson Schreiber. From that moment on the label felt like home for us. We had other meetings scheduled with other labels, but we canceled them. That acceptance was it for us, and it went on from there.

"One big advantage we had," Kristyn continues, "is that there are three of us -- it's three times as much support and staying power. Kelsi keeps us all level-headed, and Kassidy keeps us in good sprits. She's our comic relief." Kristyn, her sisters say, brings both her songwriting skills and the most in-depth knowledge of the business side of music. The support of relatives and friends has made their road that much easier. Even the name of the trio, SHeDAISY, was taken from a Native American word meaning "my sisters." In fact, during the recording of "The Whole Shebang," the girls filled the studio with the messages of love and support they received from home. This support has helped SHeDAISY turn a passion for singing into a career -- a passion that they have brought to country music. Given their unique and engaging sound, country music is the richer for it 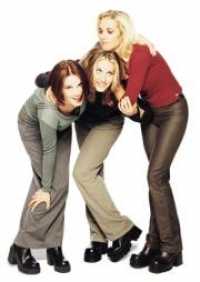