Imperiet were a Swedish 1980s rock group from Stockholm. During a few years in the 1980s, Imperiet dominated the Swedish rock scene. Imperiet started as Rymdimperiet, a side project to the most popular punk band in Sweden, Ebba Grön, and included three of its members. When Ebba Grön broke up in 1983, Rymdimperiet re-emerged as Imperiet; with Joakim Thåström (lead-vocals/guitar), Anders “Stry Terrarie” Sjöholm (vocals/guitar) & Gunnar “Gurra” Ljungstedt (drums), all three originally from Ebba Grön. They were joined by Christian Falk (bass) and Per Hägglund (sax/keyboards). Stry left in 1984 and Gurra left the following year, but was replaced by Fred Asp (drums). In 1987 Per Hägglund left and in 1988 Imperiet disbanded.

With some fame inherited from Ebba Grön, Imperiet got off to a flying start. Their songs were inspired by punk, rock and synth, and their lyrics were very left-wing politically, with songs like C. C. Cowboys, Alltid Rött, Alltid Rätt (Always Red, Always Right), and Var e vargen? (Where’s the Wolf?) inspired by Russian Communist poet Mayakovsky.

Widely successful in Sweden and Scandinavia, Imperiet even toured overseas, playing in the United States and in Cuba, Central America and South America. In 1988, Imperiet released their only album in English, under the name Imperiet, containing translated versions of their old songs. But in spite of an intensive promotional tour through Europe, the album was only a success in Sweden, and this put an end to plans for an international career.

The name Rymdimperiet, later Imperiet, (meaning the Empire), was taken from the Star Wars movie The Empire Strikes Back (1980), Swedish title being Rymdimperiet slår tillbaka. 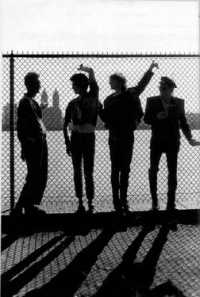