February 1991: Impaled Nazarene records their first rehearsal demo tape Shemhamforash. Sound is downright horrible due to the fact it was recorded with a two-track deck. Antti Pihkala is replaced with Harri Halonen on bass.

October 1991: The band records their infamous Goat Perversion 7" ep for the Italian company.

Winter '91-Spring '92: Both Holappa & Halonen leave the band due to lack of interest. Impaled Nazarene performs a couple of live shows in Finland as a three piece unit. Lots of controversy results because of their live show. The band signs with blood to french label Osmose Productions.

Summer '92: Impaled Nazarene asks Taneli Jarva to join the band as a session bassist. Pääkkö leaves the band and Jarno Anttila is asked to join in as a session guitarist for the impending recording of their debut album.

December '93: Both the cd and ep come out and the response in just getting better.

January '94: The band do their first European tour together with Ancient Rites.

December '94: Suomi Finland Perkele comes out and gets mixed results from the fans and the press. Due to the lyrics of the song Total War-Winter War, a youth communist movement in Paris, France complains to the FNAC chainstore and demands that the cd's are withdrawn from the shops. FNAC meets their demands but fuck-ups big time: They mix the codes and Ugra-Karma is withdrawn instead of Suomi Finland Perkele.

August '95: The band enters Tico Tico once again, to record mini cd titled Hamnasnas. It never gets recorded as Jarva & K. Luttinen end up in fight during the first night. The band packs their stuff and fucks off back home. Reima Kellokoski replaces K. Luttinen as drummer and the band decides to go back to their brutal roots.

February '96: The band enters Tico Tico studio to record Latex Cult cd and Motörpenis mini-cd. Taneli Jarva leaves the band immediately after the recordings and is replaced by Jani Lehtosaari

April-May '96: Latex Cult & Motörpenis come out, the band goes on to their longest European tour to date. They take part first to No Mercy festival 1 package together with Grave, Krabathor, Rotting Christ, Immolation and Cannibal Corpse. Dark Tranquillity joins the band for a dozens shows and then both bands join the Cannibal Corpse, Immolation and Vader tour for the last shows.

October '96: I Am The Killer Of Trolls, exclusive track for the World Domination II label sampler, is recorded at Tico Tico studio.

November '96: Impaled Nazarene play in Lille & Paris two festival shows. In Paris, while one of the support bands is playing, the local jack-ass commie brats destroy electricity, resulting 50 minutes of break. This doesn't affect the perfomance of I.N.

1997: The band does two studio instrumental demo tapes to see how their new material is shaping up and plays in the summer two big finnish rock festifals. In September '97 both I.N. and their label Osmose Productions is sued by Hare-Krishnas because of the cover of Ugra-Karma. Long legal battle ensues.

July '98: Promo video for Penis & Circes (from Rapture) is shot during Tuska Festival in Helsinki, Finland. The band plays also in Dublin, Ireland and goes on to play Milwaukee Metal Fest in USA. They also play in Philadelphia and New York and finally headline the Montreal Metal fest in Canada.

September '98: Impaled Nazarene travels to St. Petersburg, Russia together with Children Of Bodom to play one-off show. After party at the hotel results to Alexi "Wild Child" Laiho joining Impaled Nazarene as a lead guitar player.

November-December '98: Impaled Nazarene does another European tour with Ritual Carnage and Driller Killer. Laiho is unable to join the tour because of his other commitments with Sinergy.

January '99: The legal battle concerning Ugra-Karma cover is settled outside court. Osmose releases new version with a different artwork, lyrics and the deleted Satanic Masowhore 7" ep as a bonus.

February '99: Impaled Nazarene travels to Mexico second time to play four shows again. Laiho makes his live debut with the band. The band plays also in San Francisco & Los Angeles, USA as four piece as Laiho fucks off back to Finland from Mexico due to his other commitments.

March '99: As a four piece, the band goes to Japan first time to play four shows.

April '99: Impaled Nazarene takes part in No Mercy III festival package in mainland Europe. They play with Morbid Angel, Emperor, The Crown, Limbonic Art & Peccatum. Laiho is once again unable to join the band for the shows.

June '99: The band writes new material and plays Nummirock summer solstice rock festival for the first time. Again as a four piece as Children Of Bodom have a show at another festival.

July-August '99: The band heads for their first tour in Australia & New Zealand, without Laiho. A show in Wollongong, Australia gets cancelled because of the pressure from the local press & parents association (first time in the band's history).

August-September '99: The band enters Astia studio in Lappeenranta, Finland to record follow up to Rapture. Nihil features 10 songs. The band records also two tracks for Driller Killer/Impaled Nazarene split picture 7" ep, not to be found anywhere else. Nihil is mastered in late September at Finnvox studio.

October '99: Fournier, the man behind the killer cover of the Ugra-Karma re-issue, starts painting the Nihil cover.

March 2000: Impaled Nazarene plays a couple of shows in Finland with Finntroll and Throne Of Chaos. Surprisingly, Laiho plays with the band. After the Finnish shows, the band goes to play in March Metal Meltdown (aka fiasco) in New Jersey.

April 2000: The band heads for their Assault The Weak -french tour without Laiho. His replacement is Tomi Ullgren, guitar player in Thy Serpent & Shape Of Despair. The tour does not go without problems. French secret police follows the band thru the whole tour and in Montauban, the band is forced to perform their set without announcing any song title with the word Satan on them. Police also forbids the selling of merchandise because of its ?satanic? nature.

May 2000: Impaled Nazarene & Children Of Bodom hit the Greece for the first time. Laiho performs bravely enough two sets per night. Both Thessaloniki and Athens shows are great success.

July 2000: The band does a show with Ullgren at Tuska Festival in Helsinki. Jani Lehtosaari (bass) informs that he has decided to leave the band because he wants to concentrate on his record label Solardisk. Jani´s last show is in Sweden, at Dist 2000 festival. It is the first time Impaled Nazarene plays in Sweden. Luttinen relocates from Belgium back to Finland.

Fall 2000: Impaled Nazarene are looking for a bass player. Teemu Raimoranta (aka Somnium) from Finntroll is chosen for the job. At one point it becomes clear that Laiho will be unable to do any live shows with the band in the future. After serious discussions, the band opts to choose another lead guitarist so that they can concentrate fully on writing the next cd with a steady line-up. The band decides to remove Teemu from bass to lead guitar and starts to look for another bassist. Mikael Arnkil (x-Antidote drummer) gets the job.

December 2000: I.N. plays their first sold out show in Finland , at Nosturi, in Helsinki. Over 900 maniacs witness the massacre. Raimoranta is on bass guitar and Ullgren on lead guitar for the show as the band did not have enough time to start teaching the set for Arnkil.

April 2001: Impaled Nazarene heads for Czech Republic to play two shows. For the first time since 1992, Jarno cannot make it and is replaced by Tomi Ullgren for the shows. Debut I.N. shows for Arnkil.

May 2001: The band continues to write new material and plays in Oulu, Finland. By the end of the month, the band looses they rehearsal place, just two months before impending studio session.

June 2001: A show in Down By The Laituri at Turku, Finland. The band wears corpse paint for the show, something they haven´t done in six years!!! Impaled Nazarene also debuts one new song, Nyrkillä Tapettava Huora, at the festival. New rehearsal place is found.

July 2001:
Impaled Nazarene play at Tuska Open Air and at Koria Open Air Festivals to a huge acclaim. The band rehearses like hell for the impending recordings of Absence Of War Does Not Mean Peace album. At the end of July Impaled Nazarene enters Astia Studio.

August 2001:
The recordings of AOWDNMP are finished at Astia Studio. After a short break the band enters Finnvox Studio to mix and master the album. Release dates are set: Finland 1st of October, rest of the world 5th of November.

September 2001:
Listening party is held at Helsinki for journalists from around europe and everybody is amazed how much the band has grown musically over the past two years.

...and the holocaust continues 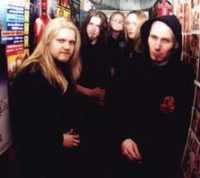