From Romford to New York, Back to back private recitals to a live debut before 150,000 people, Imogen Heap has come a long way since her childhood days in Essex. Still 20 years old, strikingly individual and ahead-turning 6 feet tall, Imogen Heap's name is an real as her music. You're unlikely to forget either....

Imogen spent her formative years in Essex, relocating to a Quaker boarding school in Cambridge at the age of 12. A loner at heart, Imogen found solace in the adjoining Music school, where she could take flight from the claustrophobia of boarding school life. The secluded music room bore witness to Imogen's growing confidence, from learning the blues scales on piano, to pacifying her bullies with private recitals and exclusive snips of songs in progress. A gifted musician, she also possessed the vocal range of alto tenor, her unique voice lending her songs a maturity their years.

a live baptism of fire followed when Imogen secured a slot sandwiched between Eric Clapton and The Who at 1996's Trust Concert in Hyde Park. A Twenty minute set before an audience if 150,000 people, the concert gave her first taste of the limelight and served to crystallise her hypnotic and highly theatrical stage manner. Gigs in Camden would later see this persona expand with the aid of a walking stick, her trademark six inch leather horns furry hat and freaky hip hop dancing. Now courted by London's A&R fraternity, Imogen signed to Almo Sounds in April 1997.

After writing and recording a track called 'Blanket' with Urban Species, Imogen started to record with Dave Stewart, but settled with producers David Kahne (of soul Coughing fame) and Guy Sigsworth, whose cut 'n' paste production style and ability to cross-fertilise musical genres engendered a feeling of mutual respect between producers and artist. Over the six months the album was recorded in New York and London. The debut single 'Getting Scared', an intense and abrasive pun to abusive relationships, provided a taster of things to come. Released as limited edition, the became XFM's 'Single of the week' and garnered rave reviews across the board.

Her second single 'Shine', released on April 13th, found Imogen in mellower mood. Its beautifully shuffling beat, descending piano chords and dark lyrical core further confirmed Imogen's musical diversity. The single won critical acclaim across the board, from Music week who praised Imogen as "a rising talent...one to watch", to Time out who found her "intense...upbeat and moody in equal proportion" to the Evening Standard, who remarked that 'Shine' was "decidedly tuneful".

And so to the debut album 'I Megaphone'. The title reflects the content: it is both an anagram of Imogen's name and an allusion to her often uncompromising stance on life. Literate and honest in the style of Kate Bush and Patti Smith, the album takes the listener on a journey from despair to elation, stability to glorious insanity via it's potent brew of mashed up beats, guitars and classical flourishes. 'I Megaphone' ranges from the tender ballad 'sleep', a song that captures Heap at her most relaxed, to the baroque arpeggios of 'Rake It In' (complete with guillotine sound); from the piano song 'Come Here Boy' an ode to a father figure turned sexual figurehead, to the sparse, disjointed beats of 'Whatever'.

Both introspective and widescreen, confessional and defiant, the album encapsulates the emotional frailty of a young woman in a raw, intimate way. 'I Megaphone' lays Imogen's soul bare. Heap herself explains, "this is my life up until now, it's frustrations, the joy and anger spread over 60 minutes. 'I'm mot a depressive person, these songs just seemed to yank out those aspects of my personality, by the end I felt like asking the record company 'can I have myself back please?'. 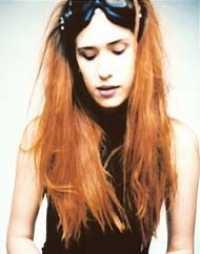