Il Divo were formed after a worldwide search, which took more than two years.

Currently living in London, the band have recently completed a long stretch of rehersals and recording sessions and are now set to release their debut single Regressa Mi. The song is a cover version of Toni Braxton's Unbreak My Heart and was recently performed live on TV's prestigious Parkinson show. Their debut album is due to be released on November 1st 2004.

Deemed to be the first ever 'opera boy band', Il Divo have it all; talent that even Simon Cowell is in awe of, looks to kill and a debut single that is tipped to be huge.

Definitely a band to watch out for. 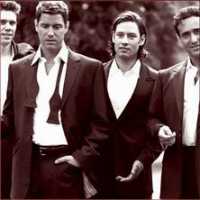