Ikimono-gakari (いきものがかり?) is a Japanese pop-rock band that debuted in 1998. They record on Sony Music Entertainment Japan's Epic Records label.

The band was formed in Kanagawa Prefecture in February 1999 by Hotaka Yamashita and Yoshiki Mizuno, and was later joined by lead vocalist Kiyoe Yoshioka in December the same year. Ikimono-gakari (生き物係?) is a child who is responsible for looking after plants and animals in elementary school. As ikimono-gakari, Hotaka and Yoshiki shared experience of feeding goldfish in first grade.[1]Contents [hide]
1 History
1.1 Formation and Trials
1.2 Rise to Fame
2 Musical style
3 Members
3.1 Support Members
4 Discography
4.1 Albums
4.1.1 Indie albums
4.1.2 Major albums
4.2 Singles
4.3 Unreleased tracks
4.4 Other
4.5 Theme songs and tie-ins
5 References
6 External links

In 1989, Mizuno and Yamashita, met by chance while they were in the first grade; they were both put in charge of being 'ikimono-gakari', an experience which later became the basis for the band's name. Yamashita later noted that he really wanted to be a "blackboard monitor".

On February 1, 1999, Yamashita and Mizuno formed a music group and began performing live on the street; not taking it too seriously, they named it 'ikimono-gakari' after their shared experience in first grade. At first, they did covers of Masayoshi Yamazaki.

In December 1999, Yoshioka joined the band. In those days, Mizuno and Yamashita planned to make a group with a female lead vocalist, an unusual sound for the street performances they were doing. Yoshioka was the younger sister of one of their classmates; she entered as the main singer and the band took on its present-day form. Now performing with three members, the band did a cover of Yuzu's single, "Natsu-iro" (The Colors of Summer?).[2]

In September 2000, they suspended the band to focus on college entrance examination for Yamashita and Mizuno. After attending Meiji University while waiting to get into a better school, Mizuno was admitted to Hitotsubashi University. Meanwhile, Yamashita got into Hosei University.

In March 2002, the band came back together and resumed playing; however, Yoshioka experienced frustration and discouragement for a while because of the strict rehearsals required for her music school. Because of her emotional condition, she stopped having the will to perform with the band. Mizuno dedicated himself to persuading Yoshioka, and went through a difficult journey meeting each of these challenges head-on.

By March 2003, overcoming many hardships, Yoshioka recovered emotionally, and was determined to take this second chance to revive and grow as a person. Again, the band members re-formed, and now they were performing to support their increasing fame as their musical style was moving towards an acoustic focus; they planned to expand their scope to cover not only street performances but live house concerts as well. Moreover, they made a greater effort to compose more original music.
[edit]
Rise to Fame

In April 2003, the band resumed playing with a live street performance in front of the Hon-Atsugi Station on the Odakyu Odawara Line. In June, they did a one-man-live performance at the Thunder Snake Atsugi live venue for the first time. A person who happened to be attending this performance became their manager, and this became the impetus to launch a major road tour.[2] On August 25, they released their first indie album, Makoto ni Senetsu Nagara First Album wo Koshirae Mashita.... In March 26, 2005, for the first time doing a one-man-live show in a hall, the band held a show in the small hall at the Atsugi City Culture Building (Atsugishi Bunka Kaikan).

On March 15, 2006, the band released their first single, "Sakura", produced by Masanori Shimada. This was their major label debut with Epic Records Japan of Sony. Their second single "Hanabi" was released on May 31, 2006, earning the band their first appearance on the Oricon top 10 chart with a #5 debut. Between November 10 to November 30, their first live tour was held, entitled "Ikimonogakari no Minna-san, Konni-Tour! 2006".

On March 7, 2007, they released their first full-length studio album, Sakura Saku Machi Monogatari, debuting at #4 on the Oricon weekly album charts. Between May 24 to June 14, they went on a live tour to support this album. Their second major studio album, Life Album, came out on February 13, 2008, debuting at #2 on the Oricon weekly album charts. This album's live tour was from March 30 to May 23. On July 7, they came out with their tenth single, "Bluebird", cracking the Top 3 Oricon ranking for the first time with a #3 debut.

On December 24, they released their third studio album, My Song Your Song. This album topped the Oricon weekly charts, becoming their first work to achieve a first ranking on any chart. On December 31, they debuted in the 59th NHK Kōhaku Uta Gassen festival.

On March 4, 2009, their first-ever collection of video works, "Tottemo Ēzō", was released. That year, Mizuno was put in charge of writing the song "Yell" as the set piece for the junior high division of the 76th annual NHK Nationwide School Music Contest. Their 15th single "Yell / Joyful" came out September 23, taking the #1 single spot for the Oricon daily charts and the #2 spot for the weekly chart, the highest rankings so far for any of their singles. On December 23, they released their fourth studio album Hajimari no Uta, debuting as the #1 album on the Oricon weekly charts.

On November 26, the band won one of the Gold Artist awards at the 2009 Best Hit Song Festival, their first time winning one of the show's prizes, and on December 31, the band appeared again in the 60th NHK Kōhaku Uta Gassen festival.
[edit]
Musical style

With the release of their first major-label album, Sakura Saku Machi Monogatari, their style changed to a more conventional rock style, but still keeping with their traditional guitar-harmonica combination. They also began to add other elements to their songs, such as strings and tambourines, as evidenced by "Sakura" and "Kira Kira Train". They also began to songs with faster tempo, such as "Ryūsei Miracle" and "Hinageshi". 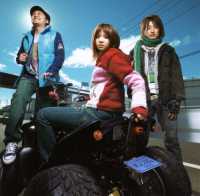