Insane Clown Posse: this horror core shock rock band may be more infamous than famous, more reviled than renowned, but they have made quite a mark on music history, and on the lives of the 1,000,000+ fans (Juggalos) who follow their music and their message. Where some see an underworld of bizarre painted faces jumping to a twisted mesh of rock and soda, others see one of the longest running records in Billboard Top 200 history, a full length motion picture, Big Money Hustlas, the second highest grossing wrestling organization in the U.S., Juggalo Championshit Wrestling (JCW), a career in the WWF, WCW, and ECW, and Psychopathic Records, the self-owned record label behind it all.

Perhaps one of the boldest and most successful moves made by Insane Clown Posse was the creation in 2000 of what has now become an annual tradition: The Gathering of the Juggalos. This three-day convention, drawing over 10,000 attendees from the 50 states and overseas, is a mix of concerts, games, contests, auctions, seminars, autograph signings, and everything and anything related to Insane Clown Posse and Psychopathic Records. The Gathering has made a huge impact in every city it has come to, bringing in several million dollars in revenue to the cities it visits. This move is unique in the music industry, and is a shining example of Psychopathic Records' ability to both pioneer and succeed through direct, focused effort.

Insane Clown Posse is without a doubt one of the most successful "behind-the- scenes" bands of all time. Their fame was won without massive radio play, so it is all too easy to discount the band; however their seven certifications (two platinum, five gold) speak for themselves. Their immense popularity lays just beneath the mainstream, yet is all the more substantial and long lasting.

The story of how Insane Clown Posse reached this level of cult celebrity over the last ten years is as detailed as it is amazing. Later in this booklet is a brief history of the five previous Joker's Cards albums to set the stage for the era of sixth and final Joker's Card, beginning November 5th, 2002, when The Wraith: Shangri-La hits stores.

November 5th, 2002, will spark the most important era in Insane Clown Posse history. The release of the sixth and final Joker's Card album, The Wraith: Shangri- La, could not be more anticipated by fans worldwide. Whether followers of the music and message from day one, or introduced to it during The Great Milenko era, all eyes and ears have been waiting for this album for quite some time.

The Wraith: Shangri-La will shock the mainstream to its foundations, going far further than anything Insane Clown Posse ever previously imagined. It is a breakthrough album that not only appeals to Juggalos, but contains messages for the entire world as well. Supported by a highly trained mobile fleet of nationwide promotional teams already on the move, The Wraith will be Insane Clown Posse's most successful album of all time. ICP's biggest tour ever, set to blaze a trail across the U.S., Europe, Australia, and Japan starting early in 2003, will catapult this album over everything that has gone before.

Psychopathic Records has weathered many storms and overcome nearly every obstacle imaginable on its mission to promote Insane Clown Posse, and is poised to push even harder to make the sixth and final Joker's Card album everything it was always meant and imagined to be. Insane Clown Posse themselves have made major changes in preparation for the new era. For the first time in their careers they have changed their style of face paint. Now, instead of black and white in fixed pattern, colors change within a black outline to match the mood, hair, and clothing of the duo. More changes will mark this chaotic and volatile era as it unfolds.

More important than appearances, though, is the dedication and attention to quality the sixth and final Joker's Card has received. It is an awesome record from a musical standpoint alone. That combined with its good, positive message is The Wraith: Shangri-La's greatest selling point.

Still heavily involved with gang activities, these were turbulent times for the group. Between explosive gang-related conflicts and stints in county jail, ICP was looking for direction in their music. The turning point happened in 1991, when according to band front man, Joseph Bruce, he had a surreal dream about the "Dark Carnival" and six unique messages in the form of albums.

Inspired upon waking, Joe gave Insane Clown Posse its name, and a new and purposeful direction. Band members totally latched onto this, quickly developing their wicked clown alter egos. They began painting their faces like clowns, in a trademark style that would remain unchanged until 2002, with the release of the sixth and final Joker's Card album. Insane Clown Posse then immediately started work on their first full-length album and Joker's Card, Carnival of Carnage. 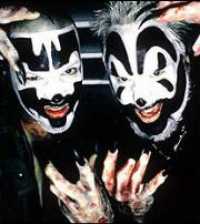