Few emotions register as deeply in the human subconscious as fear. Few historical events are meaningful enough to enter the collective memory of a nation. Merging the recollection of your first-known terror with the significance of a sociological phenomenon, Iced Earth's Horror Show is destined to become a landmark album in the consciousness of a world hungry for something musically extraordinary.

Briefly known as Purgatory and founded by the burning ambition of a 16-year-old runaway in Indiana, Jon Schaffer's vision has remained unadulterated since day one because of the obvious: nothing is more important to him than the music he writes and the fans who support Iced Earth. Remaining faithful and dedicated to defiant, non-commercial heavy metal, Iced Earth have indisputably established themselves as one of the most dynamic and musically multi-dimensional bands in the world. Terrorizer Magazine aptly describes their characteristic sound this way: "Take the best bits off [Metallica's] Ride The Lightning and Master Of Puppets, combine them with equally classic Priest and a healthy shot of vintage Maiden and you're about halfway there."

Iced Earth's self-titled debut spread steadily throughout the European underground in 1991, while in North America the metal market was soon to undergo a drastic change. Through their persistence of vision and in spite of the U.S. trend-laden music scene, Iced Earth never succumbed to the pressure of going mainstream. Songwriter and guitarist Jon Schaffer added vocalist Matthew Barlow to the band's nucleus in 1995, which strengthened the band's writing and solidified its forceful delivery. The incredible praise Barlow earned for his work on Iced Earth's third studio album, Burnt Offerings, brought only a hint of the powerful things to come. The Dark Saga, with its trademarked orchestral elements, was released in 1996 and heralded the band's breakthrough in the United States.

Sales of Iced Earth's back catalog increased with every newfound fan. Band members frequently faced inquiries about their demo recordings and unreleased rarities. Using the benefit of updated recording technology for their 1997 offering Days Of Purgatory, they meticulously reconstructed all of the material from their infamous Enter The Realm demo tape and reworked selected songs from their first two classics, Iced Earth and Night Of The Stormrider, so fans could enjoy classic Iced Earth material written between 1986-1994. Now, with the legacy of seven albums, they have built an unwavering legion of loyal-to-the-death followers around the world. In turn, they have returned that loyalty ten-fold to their fans.

In 1999, they embarked on a successful six-week national U.S. tour in support of Something Wicked This Way Comes. In Europe, they dominated stages at the Gods Of Metal festival in Italy, the Dynamo festival in The Netherlands, and the legendary Wacken Open Air festival in Germany. Words often fail the attempts to describe first-hand accounts of the raw power felt at an Iced Earth concert.

Jon Schaffer has returned for the first studio album in three years with lead singer Matthew Barlow, fellow guitar player Larry Tarnowski, and new drummer Richard Christy (Control Denied, Death, Incantation, touring drummer for Demons & Wizards). Using the trusted production skills of Jim Morris at Morrisound Studios in Florida where Iced Earth have recorded all of their studio work, they have unquestionably harnessed their collective professional talents to create a monumental contribution to the genre of heavy metal. Adeptly adjoining Schaffer's penchant for musically technical constructions with his impeccable storytelling abilities, Horror Show extols a brilliant and dramatic seamlessness from the first note to the last.

Encapsulated here is a ravaging collection of songs bearing tribute to the timeless legends of evil that have plagued our nightmares since childhood: The Werewolf, Damien Thorne, Jack The Ripper, The Mummy, Dr. Jeckyl and Mr. Hyde, The Creature From The Black Lagoon, Dracula, Frankenstein. Collectively, this album is an invocation of all your greatest fears, blatantly challenging you to look at your own malevolence. With artwork expertly handled by the team of Danny Miki (Spawn and The Creech comic book artist) and Travis Smith (cover artist for Jag Panzer and Opeth), both have created another masterful design package that's as richly detailed and haunting as the music and lyrics. This is an album generations of fans will be justifiably proud of. This is metal for the new millennia. 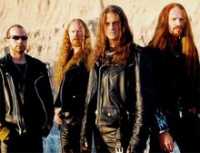