From their Myspace: It is unusual for a band to be equally influenced by hard-hitting groups like He Is Legend and Diecast, as well as the epic balladry of musicals like Les Miserables and Phantom. Yet, on Ice Nine Kills’ debut album, Last Chance to Make Amends (Out Now), the sound of earth-shattering double bass drums and lacerating guitar riffs on a song like Last Words, share space with ballads like Chapter Two that gently move the listener with little more than a soft piano and a clean guitar.
Ice Nine Kills, The band, named after the ultimate weapon of mass destruction- the Ice Nine isotope from Kurt Vonneguts novel, Cats Cradle -will, like its namesake, awe you. The group seamlessly weaves the soaring melodies of punk rock and emo with the raw emotion and aggression of post hardcore and metal, creating in the process a refreshing sound that both soothes and knocks-over the listener.

Even in their most aggressive of moments, Ice Nine Kills, unlike many bands in todays scene, does not rely on unnecessary screaming to make up for lack of depth or meaning. The whole screaming thing seems really played out these days, everyone is doing it excessively. We try to only use an aggressive vocal style when it fits the part, and when it truly intensifies the song, says Jeremy.

The band provides the listener with multi textured guitar hooks, a dual vocal attack, and a pummeling rhythm section which takes the listener by the throat, and refuses to let go We try and tell our stories not only with our lyrics but with our music as well, says Jeremy, who pens the lyrics for INK. Every song I write comes from either personal experience or that of a close friend. Of course some of the stories are exaggerated, but they are all based on things that I have been through, I think thats why kids can relate to our band.

THE PAST
Ice Nine Kills was founded by Jeremy and Spencer in 2002, in a small town on the Massachusetts coast. After several member changes, the band got lucky in the winter of 2003 when drummer Grant Newsted, a highly skilled and technical drummer from Petoskey Michigan, responded to a flier the band had posted at Berklee College of music. The line up was finalized in fall 2004 when long-time friend Hobie Boeschenstein, a skilled guitarist, took over bass and back up vocal duties.

THE PRESENT
The self-produced new album explodes from the very first track Last Words, a socially relevant song that deals with the excessive pressure that many parents put on their kids to achieve unreasonable goals, and the consequences that can ensue. The band also showcases its dark sense of humor with the song, Murders and Acquisitions, a tongue-and-cheek tale of a jealous ex boyfriend who takes revenge to a level you dont want to know about, but cant help listening to. This track owes its macabre theme, no doubt, to the bands love of horror movies, which influence not only the musical expression but sometimes, the bands hair color.

As energy charged as their new album is, Ice Nine Kills cannot be fully appreciated until they are seen in a live evironment. The band not only writes enthralling music, but their live show crackles with an explosive energy. Yet, with this band, energy is not an excuse for out of time, unfocused amateurism. They are always playing extremely tight and on time. I think a lot of bands these days either lack energy when they play live in order to concentrate more on playing tight, or some bands just go nuts on stage and dont play competently. With a lot of hard work, I think we have found the perfect middle ground, says Jeremy.

Unlike most groups, the band members try to reply to each and every email they receive, allowing them to forge an unusually strong bond with their fans and create an incredibly loyal following. Our fans are really supportive of what we do, and we consider them as much a part of this band as we are, says Spencer.

THE FUTURE…
Its obvious from their intensity and dedication that these boys are in this for the long haul. As Spencer said in a recent interview, Were not going to stop until every person that might enjoy our music gets a chance to hear us. There are so many great bands out there that never get discovered. We dont believe in just being lucky. We’ll make our own luck. 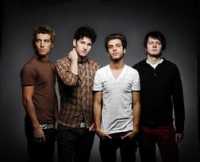