The 6 members of IAM are : Akhenaton (Philippe Fragione), Shurik'N (Geoffrey Mussard), DJ Khéops (Eric Mazel), Imhotep (Pascal Perez), Freeman (Malek Brahmi) & Képhren (François Mendy). The band was founded in 1989 in Marseille, France.
They recorded a tape named "Concept". Noticed by a producer, they started on stage. In 1991, their first album De La Planète Mars launched their career. In 1993, "Je Danse Le Mia", from the album Ombre Et Lumière, was N°1 in France during many weeks. The band announced they did a commercial song & there would be no other one like "Le Mia". In 1995, the members went solo & went back in 1997 to record a double album, L'Ecole Du Micro D'Argent, including "Petit Frère" & "Un Cri Court Dans La Nuit". The band was back in 2003 with their fourth album Revoir Un Printemps, about injustice. In 2007, Saison 5, the fifth album of the band, definitely confirmed the band's leadership in French rap. 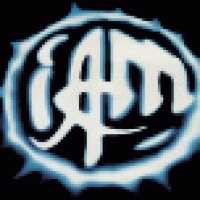