There is more than one band with the name Hurts. There is the disbanded Japanese band from 2006-2008 and currently British band formed 2009

Hurts have not yet played a gig or released a single
Before Hurts, singer Theo and synthesiser Adam were in (scruffier) bands Bureau and Daggers, the latter of which supported Gary Numan.
But on a trip to Italy, they discovered “disco-lento” (slow disco), became fixed on a more austere and stylish European aesthetic and Hurts were born.
Musically, they construct melancholic 1980s-inspired electro-pop with songs that they say are inspired by the British mentality of being “not too bad”.
“How are you doing? Not too bad. For a while you think that’s not very interesting,” Theo says. “But it can be very interesting because it’s on a knife-edge of hope and despair.”

Read a BBC Review of HURTS 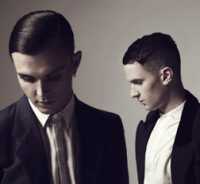