“Winners of runs, losers in love” is the leitmotiv of Housse de Racket. It is first and foremost a smart, sport concept, a musical match between two childhood friends devoted to love and sport. Not sufficiently heavy weight to become high-level sportsmen, Pierre and Victor opted for high flying pop music.

Goodbye loneliness and heartache, hello polos, rackets and guitars - because rackets are also instruments with strings.

Flashmatchs
An encounter which took place in the mid-90s, in the orchestra of the local Chaville conservatoire , where a simple Pearl Jam T-shirt worn by one attracts the eye of the other. Two teenagers who had always snubbed each other started up a conversation about Eddie Vedder and Kurt Cobain… The beginning of a love story between two best friends– and like all greatest stories it started with a T-shirt.

A few years later, after the french touch , Pierre and Victor woke up with a hangover and decided they had something to announce: “let’s racket the house”. They have the name… to racket the house becomes Housse de Racket: the duo has found its way, its identity, its banner, its ideal of life… its fate. Game, set and match!

The story of Melody Nelson Monfort
Victor and Pierre start working on a crazy rock opera project – a concept which could be to the MP3 generation what Stevie Wonder, the Beatles or the soundtrack of Phantom Of the Paradise were to our parents. Pure cult! The pitch: Vico Vix and Repi Rep, two tennis superstars are rich, beautiful, young and famous. All the girls are crazy about them – all of them? No Repi Rep wants only one… At a conference after a match, he falls madly in love
with the young and attractive Gwendoline. Repi Rep declares: “She is my Forty-love! “. Now, the challenge is simple: how to seduce Gwendoline? You can bet that Housse de Racket’s first single will win the heart of the girl… “Housse de racket” stands out as a “overhead smash” rock hymn. Perfectly balancing smooth soulful vintage synths and funky pop guitars, they offer an exciting duel between McEnroe and McCartney, love and emotion, humor and ambition!

Jet, Set and Match!
Behind the conceptual “joke”, Housse de Racket produce finely tuned pop music. Many have been already seduced: Fugu, Benjamin Diamond, Flairs, Brigitte Fontaine, Alex Gopher, Tekilatex, Darkel, as well as Phoenix. Pierre and Victor have been practising with some of the best players, while shaping their own definition of what is pop - an abbreviation of “popular“ - which
doesn’t necessarily rhyme with “vulgar”. Now Housse de Racket seems to be ready to move into the big league.

And like the great Serge and the Rita Mitsouko this EP could unify hip clubbers, grannies, Dutronc fans, and indie pop intellectuals. Let the match begin! 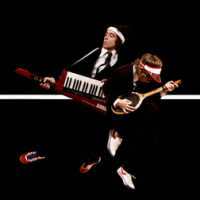