In 1991, House of Pain exploded upon the hip hop scene with their breakthrough hit "Jump Around," unleashing their particular brand of strength, guts, and talent. The result was platinum certification, echoed on their debut self titled album House ofPain nationally as well as internationally. Follow up singles, "Boom Sha Lock Lock Boom" and "Who's The Man" continued their tradition of Irish poetics and American hooliganism.

They followed their success with the release of their 1994 gold album Same As It Ever Was, proving that House of Pain was not running on the steam of one pop single, but on the hard won backbone of a loyal audience. Their formula was unique: Everlast(Erik Schrody) just let the lyrics come straight out of his angst andmuscles, Danny Boy(Danny O'Connor) was continually turning the band on to interesting and dangerous novelties for inspiration, while DJ Lethal(Leor Dimant) provided beats worthy of his namesake.

Now, two years later, after a much needed hiatus from continuously touring the world, House of Pain is back and stronger than ever with the release of their third album (Truth Crushed To Earth Shall) Rise Again. Fresh tattoos mark this occasion, as with every important event. On Rise Again, the time tested trio is joined by some very compelling friends. "Heart Full of Sorrow," the debut single, features Sadat X. Guru contributes a fluid vocal on the remix of the second single "Fed Up," while Divine Styler and Cockni O Dire, the original Scheme Team, kick it on several tracks. The association between House of Pain and the original Scheme Team goes back to 1987.

Reflecting, Everlast says, "Those guys coming back is a real signal that we're going back to our roots. Divine was one of my biggest influences from the very beginning and, in fact, he encouraged me to rap. I owe him a lot."

With Rise Again, House of Pain still relies on the hallmarks of their particular strain of rap. Everlast still works free form with the lyrics. "It's about laying it out," he says. "Not so much writing it down as it is just doing it while Leor comes up with these amazing beats constantly. And he is so consistent it makes it easy. You're just putting down what you feel." Rise Again echoes this sentiment, with Everlast summarizing the album as "A lot more spiritual, not preachy, but more full of soul. My personal essence of my soul." 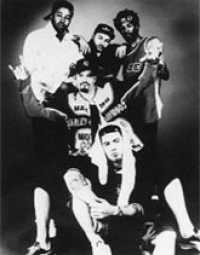