If it’s trite to say HOT WATER MUSIC’s third album for Epitaph is easily its finest album yet, it’s also the goddamn truth. When it comes to forceful, fluid and intricate punk-inspired sounds, few – if any – roar with the kind of expression and precision found on The New What Next.

Launched by the expressive, anthemic spark of “Poison,” The New What Next is a bold musical proclamation that’s uniquely paced and often irresistible. From the melodic yet cathartic drive of “End of the Line” to the captivating, infectious riffs that propel the mid-tempo “All Heads Down” and beyond, bassist Jason Black says the sonic change-ups in place for the follow up to 2002’s Caution were intentional.

“We sought out new dynamics, and we went for different tempos and different feels,” Black explains. “The only thing we purposely tried to do for this record was make sure each song stood on its own, so they didn’t really sound like each other too much. We even experimented with different tunings, which is something we never would have thought we could do. But we just keep evolving and trying new things without confining ourselves too much.”

Built on a foundation of open-mindedness, teamwork and democracy, HWM has been road and studio dynamos since coming together in Gainesville, Florida in the mid-1990s. By 2001, the quartet had aligned with Epitaph in time to drop the highly lauded A Flight And A Crash and its follow up, the much revered Caution.

Again relying on producer Brian McTernan (Cave In, Promise Ring) whom Black calls “a great shit meter for us,” the bassist says that The New What Next was “the easiest record we’ve ever made by a long-shot.” With another head in the game that the group by now trusts implicitly, Jason says that things were so comfortable with McTernan that when things wrapped up, the members of HWM “were kind of bummed that we couldn’t just hang out with him longer.”

That sort of focus and allegiance emerges from the explosive blast of the aforementioned “Poison” – single-handedly explains how the group has been able to grow its fanbase every year, remain true to itself and retain the kind of credibility eons of other “mainstream punk” bands would kill for. As Black thumps on his bass, drummer George Rebelo keeps an expert beat , Chuck Ragan and Chris Wollard carve out blistering,

memorable riffs, along with thought-provoking vocal delivery perfecting Hot Water Music’s lure. Furiously intoned prose like, “I could waste away with politics/drown myself with wine/find myself through solitude/and inject poison into my mind,” is all the evidence needed to affirm HWM’s genius.

Taking its title from the journal where Wollard kept his lyrics in, which he put together taping in pages and the cover from an old children’s book, Black says, “it just kind of fit in with what’s been going on with us.” Be it the rhythmic, airwave-worthy “Ebb And Flow,” the frenzied, exuberant “Monkey Wrench” or the pensive, emotive “Ink and Lead,” the band’s latest is a stellar representation of all its abilities.

With The New What Next, Hot Water Music builds on its legacy and defies easy categorization by unveiling a twelve-song arsenal that’s sure to please long-time disciples and recent converts alike. And that was the band’s motivation all along. “Basically, the thing we wanted to do was bridge the gap between our older and newer fans,” Black explains. 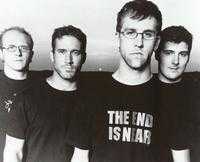