The Hilltop Hoods are the face of Australian hip-hop.

Hailing from Adelaide, South Australia, the supergroup consist of MCs Suffa & Pressure and DJ Debri. Their name originates from a part of Adelaide known by all local B-Boys (someone who identifies with the hip-hop culture (consisting of MCing, Breaking (break dancing) and graffing (graffiti)) as the Hilltop, where they were born and raised. Another local rapper, Flak, from the group Cross Bred Mongrels, recommended ‘Hilltop Hoods’ and the name stayed.

Suffa & Pressure were in the same homeroom at Blackwood High School, in the early nineties. At first they despised each other; ‘We were in home room together and didn’t like each other one bit. Pressure had a busted locker, and every morning I’d piss myself laughing as he battled the locker for his books. Pressure didn’t like me because I had a mullet and a jacket with a Motorhead patch on it.’ But they eventually became friends through a mutual love of music. Soon they were listening to nothing but hip-hop and together began writing rhymes to help get by in history lessons.

Over the next few years they began rhyming more and more until it occupied all their spare time. In the early days, DJ Next did all the scratching, but in the late 1990’s, chose to pursue a career in IT, and had to depart from the group. DJ Debris stepped up from producing to become the Hilltop Hoods full time DJ. And so they remain to this day.

The Hoods have had four successful recordings;
 Back Once Again (EP- 1997)
 A Matter Of Time (LP- 1999)
 Left Foot, Right Foot (LP- 2001)
 The Calling (LP- 2003)
And are soon to be realising their fourth LP; The Hard Road, in March, 2006 (with the single Clown Prince released in February). The Calling reached gold status in Australia, making the Hoods the first Australian hip-hop group to achieve this.

Avoiding becoming sell-outs and ‘candy rappers’, the Hilltop Hoods made a conscious promise to themselves from day one; to represent their worlds, lives, and country. But keeping true to yourselves in the ‘business’ of hip-hop today is not easy; nowadays only a small, selected handful of respectable rappers are making large numbers, while sugar-coated Neanderthals with no lyrical ability or talent are making it big.

Yet, the Hoods have stayed true to themselves and their fans, though it has been a long Hard Road. Turning down offers from major labels to stay true to their roots and independency in indie Australian hip-hop label Obese Records (Fatter Than Ya Mumma), Hilltop Hoods continue to work the mic, and have garnered fans and followers from all around Australia. Even if they don’t follow hip-hop, so many still respect and admire the Hoods for their hardship, dedication and undeniable talent. 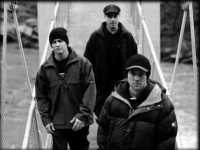