The band started with the members Meg and Sassy working in a Metallica cover band. The two founding members played in this band for two years before they decided that they wanted to go further with their talents than just cover songs. After leaving the band, Sassy offered Mackaz the opportunity to join, he accepted and invited long time friend Kazuto to join the band as well. Oddly, the vocalist was the final member to join the original band. Meg sat in on a school performance one day and one voice stood out to him. Meg offered Yuusuke the chance to join the band; he initially rejected this due to wanting to be a solo singer, but joined after Meg reportedly asked him to join every day for nearly four months. The band, known as Anti-Nobunaga at this time, played mainly in small coffee shops and art theaters for about a year. Sassy, the band leader, sent demo tapes to every major Japanese label, all of whom rejected the band. It was not until a small Japanese label signed the band that they found their first big break. The band was now playing areas further from their local Okinawa until they landed a spot at the yearly music festival of Okinawa.

During the summer of 2003, at a yearly music festival in Okinawa, the band's label hyped their spot and eventually they ended up playing for a sold out crowd. Due to this festival being a "per show" ticket selling one, it meant that Anti-Nobunaga was the only band to play for a sell out crowd. A scout for a subsidiary of Sony Music Entertainment Japan was in the crowd and offered the band the chance to produce a song for an upcoming various artists album entitled Okinawa 2003. At another festival known as the "Music Picnic Festival", vocalist Maakii also grabbed the attention of the same scout that found Anti-Nobunaga. The scout felt that both projects on their own were not remarkable, but combined, the band could be something never before seen on the Japanese music scene. Maakii first rejected the offer due to her wanting to study English abroad but was later convinced by her future band-mates to join. With the addition of Maakii the band took on a new name, High and Mighty Color (Handmc). After six months of perfecting their craft, the band was moved up from SMJ's minor label to their major label, in league with bands such as Orange Range. They spent much of 2004 writing and recording, in late 2004 they released their first single, "Over" which was only sold through Tower Records stores. It sold out in the time frame of a month and became immensely scarce, thus it was re-released the next year. The album sat at number one spot of the indie Oricon charts for an entire month.

During 2005, the band released their first official single, titled "Pride", it was originally to be attached to a Japanese football event being held at the same time but was picked up for something else. A Sunrise music partner was looking for a song to use for Mobile Suit Gundam Seed Destiny and "Pride" was chosen to be that song. At the time, the show was the number one rated anime in Japan, and being attached to this helped the single's sales immensely. With a final sell count of 223,208 copies, "Pride" remains the band's best selling single since the official start of their official career.

Over the next year, the band went on a media blitz, performing for shows such as Music Fighter, Music Station and Hey Hey Hey at various times. During August, the band released "Days", their fourth single and currently their lowest selling single, selling only 7,679 copies and not breaking the top 20 mark on the Oricon charts. Despite this setback, the band was still honored with the Japanese Record Grand Prix's Rookie of the Year award and Maakii's grandmother who had just passed away was given a tribute just before their performance.

In April 2006, the band released their second album after only releasing two singles for the album. The album sold less copies than their original album, but it stayed on the Oricon charts longer and managed to gain a higher peak position than their first album. The band's first single of the year was "Ichirin no Hana" (一輪の花 ) and was used as the third opening to the anime adaption of Bleach. This was the first and currently only single to break the top five mark on the Oricon charts since their debut with "Pride". They also played their first American concert at an anime convention on April 28.

The band then went on a large scale Japanese tour. They played 65 venues over the course of the next five months. They released their seventh single, "Dive into Yourself", in August. The song was used as the opening song for the video game Sengoku Basara II. This was the band's second lowest selling single and was also their lowest ranking single among the Oricon charts, only managing to reach the 24th spot on the weekly charts. Their 8th single "Enrai " (遠雷~遠くにある明かり was released on October 25 and used as the ending theme for the third Gundam Seed Destiny compilation movie, Mobile Suit Gundam Seed Destiny: Special Edition. The single entered the charts 12 spots higher than "Dive into Yourself" at number 12.

Maakii made her acting debut with the December 2006 movie, The 26 Year Diary. The band performed two songs for the film, "Tadoritsuku Basho", the film's theme song and "Okizarisu", an insert song. The two songs were be released as a doubled A-side single. When The 26 Year Diary was released, it entered the Japanese box offices in the 10th position. Also, another song "Resistance" was used as the theme song for a Nintendo DS game based on Bleach, Kokui Hirameku Requiem.

On February 21st, the third album from the band was released, San (参 . The album contained 15 tracks with ten being new releases. On February fourth, the official High and Mighty Color website released various 30 second previews of songs from the new album. The album was ranked number ten on the Oricon daily rankings during its first day and 16th on the weekly charts.

The band is relatively low key with their personal information, releasing only minuscule amounts of information over the years. Maakii's real name is Masaki Itsushima, this was discovered as her name on the Japanese fan forums for the band. She has since confirmed that it is her real name. Kazuto's real name is Kazuto Kanzu, Mackaz's real name has been discovered to be Masakatsu Minei, Yuusuke's real name is Yuusuke Yushishiro, band mate Meg also shares the same first name as Yuusuke with a slight variation in spelling. The band's other details are kept even more private, like most Japanese music stars, very little is known about their personal lives at all. 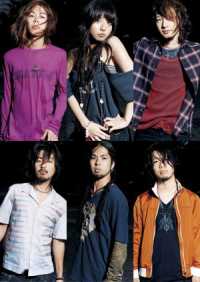