HERMANNUS (HERMAN) VAN VEEN, (Utrecht; March 14, 1945) is a Dutch artist. He plays the violin, sings, writes, composes, directs, acts, paints and is an activist for the Rights of the Child.

Born in Utrecht, he grew up as the only boy in a working- class family. He studied violin, voice and music pedagogy at the Utrecht Conservatory.

In 1965 he made his theatrical debut with the musical, clownish, solo program, “Harlequin”. Since then he has traveled all over the world, performing in four languages.
Following a request from Unicef and The Hague Residentie Orchestra in 1976, van Veen wrote a theatre piece about the courageous duck, "Alfred J. Kwak". A picture book of this production was published in 1979 and in 1987 Alfred J. Kwak became a comic strip figure and was the basis in 1989 for a 52- episode animation series in Japan which rose to cult status and was seen all over the world.

To date he has created 150 CDs, 12 DVDs, some sixty- odd books, numerous scenarios for, among other things, the feature films “Uit Elkaar” and “Nachtvlinder” and for the music theatre productions “Jukebox”, “De Kamerrevue”, “Lune”, “The First Lady” (together with Lori Spee), “Chanson de Daniël”, “Mata Hari” and “Windekind”. At the moment he is writing “Een Dag in September” and working on “Margot”. These two youngest productions are planned for 2009.

For years he was a volunteer, board member and goodwill ambassador for Unicef in the Netherlands. In addition, he established several organizations himself: The Colombine Foundation; The Alfred Jodocus Kwak Foundation; The Roses for Children Foundation and The Herman van Veen Foundation. All of these organizations are committed to and ask attention for the Rights of the Child through knowledge sharing and small- scale projects in developing countries as well as in Europe.

Van Veen is the bearer of The Louis Davids Ring (Louis Davids was a legendary Dutch entertainer in the 1920s and 30s), which he received in 1976 from the late Wim Kan, an illustrious Dutch comedian and political commentator.

In 1993, he was decorated by the Dutch Queen and made Knight in the Order of Orange Nassau. In 1999, because of his special contributions to German-Dutch relations, he received, on behalf of the President of the German Republic, The Verdienstkreuz am Bande des Verdienstordens der Bundesrepublik Deutschland, a Cross of Merit. In 2008 Herman was promoted by royal decree to Knight in the Order of the Netherlands Lion.

Through the years, Herman van Veen has been honored by many awards: a Golden Camera (for Alfred Jodocus Kwak); a Silver Bear (Berlin Film Festival); eight Edisons (the Dutch equivalent of the Grammy); the 2002 Radio 2 National Air Play Award; the Prix d’ Humanité; Le Prix Charles Cros for Literary Music 2003 for his theatre show and CD “Chapeau”; Le Prix l’ Organisation Internationale de la Francophonie 2003 for his CD “Chapeau” and several awards at The International TV and Film Festivals in New York.

In 2004, he received The World Peace Flame, symbolizing peace, freedom, unity and truth and inspired by the eternal flame, which burns in the house of Mahatma Gandhi. In 2005, The Club of Budapest awarded him The Planetary Consciousness Award, an award previously bestowed upon Michael Gorbatsjov and Nelson Mandela. In that same year he also received from Sabine Christiansen in the Rolduc Abbey in Kerkrade, Netherlands, the Martin Buber Plaquette 2005 for the respectful and loving manner in which he is involved with his fellow man.
This award, established in 2002, was first presented to German Chancellor Helmut Schmidt and in 2007 to human rights activist and top model Waris Dirie.
Furthermore, Herman van Veen has been ambassador for the Music in the Middle East Foundation since 2005.

After the death of his parents he began to paint. His work is mainly abstract monochrome and by now can be seen in a number of European galleries and museums. In February of 2008, a Dutch postage stamp of him was released,
a milestone marking- as he put it - the halfway point in his life. 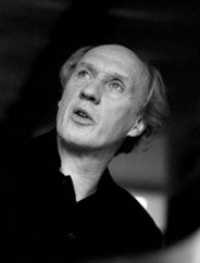