Hazel O'Connor was born in Coventry, England. The years before she shot to fame with the film "Breaking Glass" were eventful to say the least - see Hazel's autobiography "Hazel O' Connor Uncovered Plus - Proteus Publishing Ltd. 1981 ISBN 0 906071 81 X for full details. As Hazel wrote in the introduction note of the programme for a gig at "At My Place" in Santa Monica, LA in 1989 "I ran away from my home in Coventry when I was 16.....made and sold clothes in Amsterdam, picked grapes in France, joined a dance troupe that went to Tokyo then onto Beirut (escaping the start of the civil war by one month!) traveled West Africa, crossed the Sahara, sang with a dreadful singing trio for the U.S. troops in Germany and came home to "settle down". Through all this experience of life and the world I realized that singing always cheered me up. I decided to be a singer. Through strange turns of fate I ended up in a film called 'Breaking Glass' I also ended up writing all the songs for the movie"

In 1980, her performance as Kate in Breaking Glass won Hazel the Variety Club of Great Britain Award for 'Best Film Actor' and BAFTA nominations for 'Best Newcomer' and 'Best Film Score.' The album of the same name went Gold and was number 5 in the UK charts for 28 weeks and produced several hit singles, the most successful being the haunting 'Will You'

Subsequent albums include Sons and Lovers, Cover Plus, Smile, Live and Kicking in LA, To Be Freed, Over The Moon.....Live, Private Wars and Five in the Morning. Legal battles plagued Hazel from the early 1980's - in her own words "I became famous, then had a load of court battles to fight against my first record company, I was ripped off, torn up and spat out by the machinery of 'Showbiz'" However, despite the hassles, Hazel continued to record and to play live, touring the UK, Ireland, Europe and the USA with her band, and continuing her career as an actor.

She has made numerous TV appearances, starring in Jangles on British television and in 1986 playing the lead role of Vivienne in the critically acclaimed Fighting Back. She also played a singer in an episode of Prospects on Channel 4. 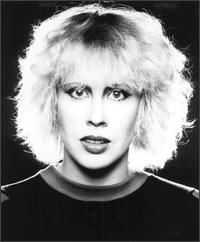