Hawthorne Heights was formed out of a desire to play music that the members were passionate about, with the ultimate goal being to become a full-time, professional band. Their dreams are fulfilled now with the release of their Victory Records debut, "The Silence In Black And White".

Forming in Dayton, OH in June of 2001 under the name "A Day In The Life", the band decided to rename their previous musical endeavor due to lineup changes and evolving musical styles. With the final lineup in place, Hawthorne Heights began playing out on several national self-booked tours, sharing stages with bands like Descendents, From Autumn To Ashes and Coheed And Cambria. Fast forward to November, 2003, Chicago, IL. Victory Records’ President, Tony Brummel, is doing his usual Saturday morning demo listening and plays the Hawthorne Heights CD. He is sold on the band immediately, as is the rest of the Victory staff, and the Hawthorne Heights boys drive from Dayton to Chicago to showcase for the label. They sign a deal with Victory shortly thereafter.

Hawthorne Heights recorded "The Silence In Black And White" over four weeks in Madison, WI at Smart Studios and in Chicago, IL at Big Gold Studios with Dan Duszynski in February and March of 2004. "The recording process this time around was an experience within itself. We got to take our time and experiment a lot more than we’ve been used to in the past. Sonically, this record is such a step up from anything else we’ve done. We are very proud of the finished product", commented Eron Bucciarelli (drums). "The Silence In Black And White" contains songs of frustration, personal growth and evolution. Musically, it tests the limitations of the "post-hardcore" and "screamo" music genres, adding deeper and darker subtleties.

Influenced by bands that range from Led Zeppelin to Quicksand to Nirvana and Shades Apart, Hawthorne Heights’s brand of radiant and fiery post-hardcore is expansive yet more focused than the efforts of other bands they will be categorized with. Their triple guitar attack alone sets them apart from the rest. "With JT, Casey and Micah all playing guitar, we can add a lot of layering effects and intricacies to our music along with legitimately pulling in different musical styles", said Eron. "To us, ‘The Silence In Black And White’ is the perfect melting pot of all of our different musical tastes."

Their pervasive crossbreed of discordance and melody with guttural growls and layered, sweet-sounding vocals brings new and imaginative depth to "The Silence In Black And White". Check out Hawthorne Heights on the road this spring with label mates Silverstein. Hawthorne Heights will be on tour all summer long and will be appearing on select dates of this summer’s Warped Tour. 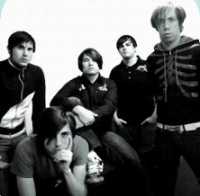