Shelton Hank Williams (born December 12, 1972 in Nashville, Tennessee) is an American musician. He is sometimes credited as Hank III, or even III.
The grandson of Hank Williams and the son of Hank Williams Jr, he spent much of his early years playing drums in punk rock bands. In 1996, child support payments led Hank III to sign a contract with Music City giant Curb Records. Three Hanks: Men With Broken Hearts was issued shortly thereafter, which brought the voices of all three generations of Williams men together. While this may seem to be a nice beginning, it was quite different from what Hank III himself desired musically. Despite having been born in Nashville, Tennessee, Hank III has never had a preference for mainstream Country.
While his name (and his uncanny vocal and physical resemblances to his grandfather) could have guaranteed him a thriving Country audience, he had no patience for the often predictable Nashville sound, nor for even the minimal constraints on behavior his promoters required. His opinions on this subject are well summed up in the songs "Trashville" and "Dick in Dixie."
His first album on his own, titled Risin' Outlaw, was released in September 1999. Lovesick, Broke & Driftin' was released in 2002. He had a great deal of trouble with his label Curb Records. Reportedly the label was unwilling to release his appropriately named This Ain't Country LP, nor allow him Hank III to issue it alone. The label was also upset that he sold t-shirts that read "Fuck Curb.".
In late 2004, Thrown out of the Bar was slated for release but Curb Records opted not to release it. Hank III and label executive Mike Curb would be in and out of court for the next year, and the judge ruled in favor of Hank III in the spring of 2005, demanding that Curb release the album. Shortly thereafter, Hank III and Curb Records came to terms, and Hank III dropped his "Fuck Curb" campaign. Thrown out of the Bar was reworked into Straight to Hell.
Battles with Walmart had delayed the release of his third studio album, titled Straight To Hell, which was released on February 28 as a two-disc set in two formats: a clean version (for Wal-Mart), and an uncensored version, which will be the first major-label Country album to bear a parental advisory warning.
The song titled "Pills I Took" on Straight to Hell is a cover of a song originally by Those Poor Bastards.
He plays Country with his "Damn Band" and produces a rather different sound with Assjack, which is a punk metal band. He is also the Bass guitarist in Superjoint Ritual, with former Pantera frontman Phil Anselmo.
Hank III's sound is difficult to classify, and has been described as hard-twang, punkabilly, cowpunk, alternacountry, slacker swing, hellbilly, and honky punk.[1]
Hank III has recorded the tracks "87 Southbound" and "Thunderstorms and Neon Signs", which were penned by Wayne Hancock, a musician who is often compared to him.
Hank III enjoys an extremely loyal grassroots fan base and much of his success can be attributed to his taper-friendly stance regarding the audio/videotaping of his frenetic live shows, which have been his main promotional vehicle with the lack of attention paid to his promotion by the Curb label.
The Damn Band/Assjack also featured fiddle-player extraordinaire Michael "Fiddleboy" McCanless, who would play both sets, the traditional Country set of the concert and then come back and plug his fiddle into a distortion box and saw away during the metal set.

Call it hard-twang, punkabilly, cowpunk, alternacountry, slacker swing or honky punk. It's certainly not your grandfather's country music nor is it your father's, either, unless your grandfather happens to be the legendary Hank Williams and your father Hank Williams Jr. Like his famous forebears, Hank Williams III is a rebel to the country establishment, though you wouldn't necessarily know it from his Curb Records debut, "Risin' Outlaw," which takes the music two generations back to the raw, urgent roots of its melancholy, sad-eyed troubadour, who died at the age of 29 in the back seat of a car.

"Risin' Outlaw" is the slogan tatooed to Hank III's arm and it's an apt description of his current career arc, as the 26-year-old whose friends call him by his given name Shelton faces up to that legacy, even if his live shows have the manic intensity of the punk-rock he once played as a teen in a variety of thrash bands in the Southeast with names like Buzzkill.

"I listened to my grandfather's music when I was four years old, but at the same time, by the time I got to ten, I was listening to KISS, Black Sabbath, AC/DC and Ted Nugent, too," says Williams III, whose own father left home when Hank was just four years old. "I didn't really start listening to country from a singer/songwriter's point of view until I was 20 or 21. Back then, I was just screaming my head off and playing drums. I was into anger and chaos. I'd never tapped into melodies, touching people's souls and making them cry."

It took a $24,000 child support suit and a $300-a-week pot habit to get Hank III to finally give up the $50-a-gig punk life and record his long-awaited country bow, but the aggro urgency and intensity comes through clearly on the hard swing of "If The Shoe Fits," co-written with Warren Denny, the playful swagger of "Cocaine Blues," originally covered by Johnny Cash on "Live at Folsom Prison," and the raw-cousness of his live "Why Don't You Leave Me Alone." What makes Hank so unique, though, is his ability to convey his grandfather's mournful twang on such chilling evocations as his autobiographical "On My Own" and Wayne Hancock's "Thunderstorms and Neon Signs" and "87 Southbound." Indeed, it is fellow neo-classicist country performers like Hancock, Dale Watson and Big Sandy and the Fly-Rite Boys whom Williams points to as the future of Nashville, even if the country music mainstream has so far shunned them. Hank's own music returns to the themes of fellow outlaws like Johnny Cash, Willie Nelson, Merle Haggard, Waylon Jennings, David Allen Coe, Johnny Paycheck, Kris Kristofferson, George Jones "all artists who were, at one time or another, snubbed by Music City.

"My first album doesn't even begin to describe all the things I got going on," he says. "It feels like sometimes this could happen and sometimes like it couldn't. I don't want to have to try to write for the radio. If you play good songs, that's all that should matter. This is music you can't ignore, but country radio refuses to play it just because it has no drums and a doghouse bass."

Indeed, Hank Williams III's current fans range from tatooed, pierced teens and twentysomethings more prone to body-surfing than line-dancing to blue-haired ladies and 60-something gents eager to hear the lad with the eerie resemblance to Hank Williams sing his grandfather's songs, like "Your Cheatin' Heart" and "I'm So Lonesome I Could Cry."

"I hope one day that doesn't come back to bite me in the ass," says Hank, explaining how his six-piece Damn Band ranging in age from 30 to 60 plays two distinct sets, a thrashing, raw-boned one for the alternative crowd and a more orthodox straight-ahead country show for older fans.

"And then there's the nights we play country music followed by punk-rock," laughs Hank. "I'll tell the older crowd they might want to take off about now. A few times, they'll stick around, then come up later to tell me how much they enjoyed it."

It's just that dichotomy that makes Hank Williams III a star in the making. It's a rare performer who can mix amphetamine-laced punked-up honky-tonk like "Blue Devil" with a plaintive, wistful number like "You're The Reason," all the while wearing a Black Flag T-shirt. Someone who can open for George Jones or the Reverend Horton Heat, as he's done.

After all, performing is all Shelton Hank Williams III really knows. He started out playing with his dad on-stage when he was just ten years old and hasn't stopped since. His songs touch on the eternal verities of country-blues as it does his own hard-living past and present: treacherous women, dancing with the devil, dalliances with drugs and booze, the loneliness of the road, the Lord and redemption. It's just too bad the country music kingmakers don't recognize him as one of their own.

"I don't want to kill my reputation so bad in Nashville that I won't be able to keep making music there," he says. "I'm in it for as long as my voice will hold out. One day, the revolution that trying to happen will happen. The Grand Ole Opry will get off their asses and realize, when they were really happening, most of the people on it were under 25, just like us. What fuels me, more than anything, is heartbreak and being broke."

These days, things are looking up for Hank III. The press buzz continues to build in publications like the L.A. Times, Rolling Stone and Salon.com., he's just opened for Beck and the Reverend Horton Heat and performed live on "The Conan O'Brien Show."

Hank dares to let himself get optimistic. "We're hoping. We'll just keep plugging away. It feels the same to us, except we're getting to open up for the type of shows we need to be doing. I'm sick of headlining these little redneck, honky tonk dives where they play disco music before you go on and you have to put up with people who don't even like country music, but curse you and ask why you can't play something they can dance to. And then stare at us like we're a bunch of freaks. Rock audiences aren't rude like that. The best place for us to play is in the cities. No one seems to want to hear country music out in the country, but in the city, people are starved for it." 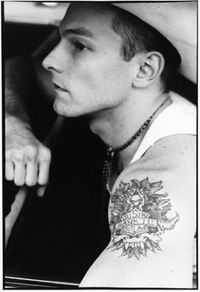