A 90s New York, USA hip-hop 'supergroup', the Gravediggaz feature ex- Stetsasonic personnel Prince Paul (b. Paul Huston, USA) and Fruitkwan, renamed the Undertaker and the Gatekeeper respectively, plus Poetic the Grym Reaper and RZA the Rzarector. Poetic was formerly a member of the Grimm Brothers, while RZA was the production genius behind Staten Island's Wu-Tang Clan. Prince Paul started the group after his Doo Dew label collapsed, needing a new venture to express his frustration.

He had originally contacted his fellow band members with the intention of putting together a compilation album. The outfit's debut single was 'Diary Of A Madman', which premiered their gothic/horror style, and utilised loops donated by producer RNS (famed for his work on Shyheim 's debut set). They toured in the USA with the Wu-Tang Clan, while Prince Paul went back to production work for Soul II Soul (having already recorded the groundbreaking 3 Feet High And Rising with them) and Living Colour. Further work such as the Nowhere To Run, Nowhere To Hide EP and the 6 Feet Deep set embossed a growing reputation for their horrorcore hip-hop. By 1995, they were also considered by many to be the nearest US approximation of the UK's trip-hop scene. This impression was cemented by a collaboration with Tricky on The Hell EP, which entered the UK Top 40. The Wu-Tang production crew of True Master and Goldfinghaz worked on The Pick, The Sickle And The Shovel, leaving RZA free to concentrate on his rhymes. 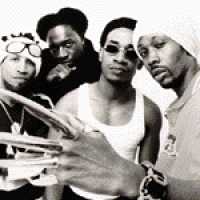