In November 2005, just minutes before the Gotan Project were due onstage at the Gran Rex theatre in central Buenos Aires, Argentina, band guitarist and native Argentine, Eduardo Makaroff, summed it all up in one key quote: "The lyrics of many of the famous tango songwriters would always talk about going back to this city, and so we're returning to the South and to the place that's in our hearts."

Sat in on the sessions with them were a host of local session musicians; a complete string section, two emcees, one trombonist and Argentine piano legend and long-time Gotan collaborator, Gustavo Beytelmann, conducting much of the musical goings on.

Five years on from breaking new ground in tango and electronica with their debut, 'La Revancha Del Tango' - now having sold in excess of a million copies worldwide, and shows anywhere from Tel Aviv to Tokyo in between, the band now had the small matter of developing the longstanding love affair that the public had now embarked upon with tango to concentrate on.

"We really wanted to explore both tango and folkloric music from Argentina a lot further than we had before," says Philippe. "That's why many of the tracks are really classically tango-orientated, very traditional patterns that people like (Anibal) Troilo would use."

The resulting material from those sessions was and is quite possibly their most accomplished work yet. Not wanting to replicate any of what 'La Revancha...' had originally achieved musically, Philippe, Christoph and Eduardo subsequently flew back to Paris two weeks later to begin the second leg of work on 'Lunatico' – named, quite appropriately, after tango hero Carlos Gardel's champion racehorse of the 1930's.

Fellow collaborators; Argentine Bandoneonist, Nini Flores, and Barcelona-based vocalist, Cristina Vilallonga, joined up with them at their Substudioz back in the French capital and thus began the completion, hidden under top secrecy, of 'Lunático'.

With a decidedly stronger emphasis on the more organic roots of tango, almost to a classical level, 'Lunático' has taken one step backwards in order to move two steps forward in what not only the Gotan Project, but also many of Argentina's top tango musicians see as the progression of their beloved music's ever-evolving lifespan.

"Recording this album was a more natural process for us all," Philippe adds, "as we wanted to continue the tango experience and in ten years time hopefully we'll still feel the same." 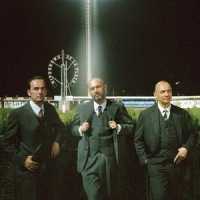