With these new developments the Golden Earrings began a more extensive touring program, performing in other European countries as well as the United States. Eggermont was replaced by drummer Sieb Warner, and the group's sound began to evolve in a harder, edgier direction. Eight Miles High won them international acclaim. Then Warner was replaced by drummer Cesar Zuiderwijk, and in 1972 Golden Earring toured as a support act for British rock band the Who. This led to their signing with Track Records.

In 1973, Golden Earring scored a colossal hit with Radar Love, from the Moontan album. However, although the song was hugely popular in the United States, the group were unable to ensure continuing success there. For one thing, the band line-up was still changing. Robert Jan Stips was keyboardist between 1974 and 1976, and between 1976 and 1979, Eelco Gelling played guitar alongside Kooymans.

By 1980, however, the group reverted to its original line-up of Hay, Kooymans, Gerritsen and Zuiderwijk. As a foursome they continued to prove themselves with their unique, raw and powerful style of rock 'n' roll and their reputation as a knock-out live act. Twilight Zone, from the Cut album of 1982, was another big hit in the U.S., as was When The Lady Smiles from N.E.W.S. a few years later. All four members have engaged in solo projects at one time or another through the band's career, and they continue, forty years later, to produce the moving and inventive rock 'n' roll their fans love so dearly.

After some thirty-plus albums, Golden Earring was asked to compose and record the Netherlands' official theme for the 2000 Olympics in Sydney. The song was recorded in the Earring's studio in Belgium and edited in Wisseloord Studios in Hilversum. In the latter location, full orchestral accompaniment was added. Arcade Records put the single out. It went gold in the Netherlands before it was even released. George Kooymans officially presented it on July 12th, 2000, at the introductory ceremonies for the Netherlands' Olympic team. At these ceremonies the song's title was revealed, having been kept a secret up until this day: "Yes! We're on Fire." 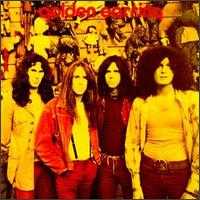