Glee is a musical comedy television series that airs on Fox. It focuses on a glee club set within a high school in Lima, OH.

The series will have covers of many different songs sung on-screen by the characters. Among the songs featured in the pilot are “Respect” (sung by Amber Riley), “I Kissed a Girl” (sung by Jenna Ushkowitz), “On My Own” from Les Misérables (sung by Lea Michele), “Can’t Fight This Feeling” (sung a capella by Cory Monteith), “You’re the One That I Want” (sung by the entire glee club), “Rehab” (sung by a rival glee club, Vocal Adrenaline), and, most notably “Don’t Stop Believing” (sung by the glee club). It was announced on May 4, 2009 that the night of each airing, the songs will be made available on iTunes starting on May 19, 2009, with full versions of “Rehab” and “Don’t Stop Believing”.

Among the future songs that will be heard include “Bust Your Windows”, which will be sung in a fantasy sequence by Riley, and Kristin Chenoweth will sing “Maybe This Time” from Cabaret and “Last Name” 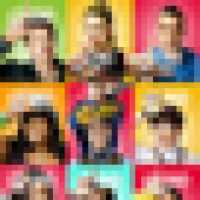