"Mix up the best of Hot Water Music with the finest of the melodic SoCal sound, and think of a chugga chugga No Use For A Name or Face To Face with huge melodies and even bigger balls positively reeking of emo." - Hit List
Put aside your misconceptions about what hardcore should be - this is Glasseater, a Miami based band that blends melodic punk with a fierce hardcore backbone to showcase intensely honest songs about life's trial and error. Chameleon-like in their ability to evoke different moods mid-song, Glasseater's raw punk fury and contagious, tight hooks are fresh and invigorating. The band has been a praised for years - Ink 19 raved, "Florida band Glasseater wins the creativity award for now. They've managed to take giddy pop-punk, make it a bit darker, and throw in some hardcore undertones...some of the best and most innovative music in punk and hardcore today..."

Formed in Miami in 1998, Glasseater began as a progressive rock band mixing several influences. They quickly became known for raging live performances that quickly earned them a growing following of loyal fans. Shortly after playing out they attracted the attention of Ides Of March Records, who released their debut album, "Miles Ahead Of Where We Left Off." Glasseater hit the road with a vengeance, establishing a reputation as one of punk rock's hardest working bands, sharing the stage with A.F.I., Dillinger Escape Plan, Green Day, Dashboard Confessional and many others. They continued to record prolifically as well, recording an album for Eulogy and their third album with Fearless Records.

As a band from Miami, a city that is a melting pot of cultures, the members of Glasseater have diverse ethnicities. Singer Julio is Columbian, guitarists J.C. and Ariel are Cuban, bassist Anthony is Cuban, Mexican and Chinese and drummer Nate is German-American. "The fact that we are all from different places adds color to our sound, we all listen to different music, so when we start writing we blend it together", explains Julio.

In March 2003, Glasseater signed to Victory Records and hit the studio in May to record "Everything is Beautiful When You Don't Look Down." They recorded with producer James Wisner (Dashboard Confessional, New Found Glory). "We chose James because we've worked with him before and we trust him to capture the sound we are looking for, and he has a great work ethic," Julio said. Writing the album was a new experience for the band, "Since J.C. lives in South Carolina now, he was burning ideas onto disc and sending them to us to add parts to, and then on tour we would practice in the van while we drove," laughs Anthony. "But we had a lot more time to work on it than we have in the past, so we are really proud of the record".

The songs on the record cover aspects of life that everyone struggles with, from honest communication with oneself and others to love, facing fear and living without regrets. The title track, "Everything Is Beautiful When You Don't Look Down", was written to express the importance of opening one's eyes and mind, of questioning the status quo and forming individual opinions to lead a more fulfilling life. "The concept was around for a while, the chorus was done, but I finished it up on tour before going into the studio. Everyone in the band feels strongly about thinking independently and being open to new ways of thinking, so it came naturally", commented Julio. Other standout tracks include "Art of Communication", "Greetings...Goodbye", "At Your Own Risk" and "To Feel Adored". The CD also contains enhanced footage, including an in-studio documentary, interview footage, a music video for "At Your Own Risk" and access to a secret website.

"Everything is Beautiful When You Don't Look Down" hits the streets on August 26, 2003, and to celebrate, Glasseater will do a headlining tour with label-mates Bayside in direct support. Amp Energy Drink, Atticus, Macbeth, Mesa Boogie, ESP Guitars, Ernie Ball/Musicman and Orange County Drums sponsor the band. 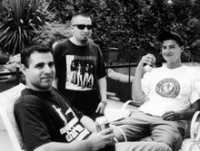