They are sassy, sexy, seductive and sweet, and they have voices to match. They ooze a sex appeal so innocent, it hurts. And when they move, the world moves around them. A year ago they were four strangers who shared a single dream. Today they are four best friends living that dream. They are more than just delicious, they are Girlicious. And they are going to make you squirm with delight.

You aren’t born Girlicious, though, you have to earn it. They began as four girls amongst thousands of the most talented and charismatic singers and dancers in the country. Of the thousands, twelve were hand-chosen from nationwide auditions to compete on the CW network’s smash television reality show “The Pussycat Dolls Present: Girlicious.” The concept was simple, with a panel of judges that included Pussycat Dolls founder Robin Antin, Geffen Records Chairman Ron Fair and multi-platinum recording artist Lil Kim running the girls through a “Pussycat Dolls Boot Camp” of challenges designed to determine which three girls were most ready to have their lives transformed and superstardom thrust upon them as they became the next great girl band.

Apparently that was a harder task than the judges had expected, because in a series finale viewed by millions, the judges shocked America and the five finalists by announcing that Girlicious would be fronted by four femme-fatales, not three.

And just like that, stars were born: Natalie, Nichole, Tiffanie and Chrystina became Girlicious.

“The whole experience has been kind of like ‘The Twilight Zone,’ it’s been crazy,” explains Natalie, 19, a native of Diamond Bar, CA, a small city about 30 miles east of Los Angeles. She’s sitting on a couch in a posh Santa Monica, CA, studio and rehearsal space across the street from their new label, Geffen Records. It’s where Girlicious have spent practically every moment of their waking lives since the show finished taping in July ’07. In the months that followed, the girls were kept, literally, under lock and key. Only their parents knew they won, and some of their friends didn’t even know they were on the show until it started airing the following February. “One day I was this girl doing my own thing, having a boyfriend, doing whatever I wanted during the day, taking my dance classes, and then I go to this audition and I’m plucked out of my life like I was in ‘The Bourne Identity” and my name didn’t exist anymore. It sounds obvious to say, but my whole life has changed so much…”

With that, all four girls agree. But as fans who watched the show know, they didn’t always agree. From day one in the studio loft, cliques were formed and there was more than a healthy share of cattiness to go around. In fact, the most volatile moments occurred between the four girls that would eventually be crowned Girlicious. Natalie and Chrystina formed an immediate bond and an intense rivalry with Tiffanie and Nichole, and it took more than the girls winning the competition to make it subside.

“No, we don’t hate each other anymore,” Los Angeles native Tiffanie, 19, laughs, crunched between Natalie and Nichole on the couch and paying as much attention to their hair as she does the conversation at hand. “When we first got picked for the group, it was definitely like it was two-on-two, because we really didn’t like each other in the house. But it’s all good now…” “We’re pretty-much like family now, we’re like sisters,” continues Nichole, also 19, but hailing from Houston, TX, the only non-Southern Californian in Girlicious. “We really love each other, and we really have a natural chemistry together. When we’re onstage and performing, you can tell that we really came together.”

“It would have been weird if the label just threw us together and said, ‘Okay, go be a group,’ and we didn’t know each other,” adds Natalie, “but because we got to know each other in the house, the good and the bad, we already had an idea of how we’d work out. It’s exciting to know that we all came from the same experience and we all had to work equally hard to be where we are right now. We went through it together. Everyone sang on the show, everyone danced on the show, and it wasn’t just a case where someone looked the part. That made it a unique and exciting experience. Even after we found out we were all in the group, we were still trying to outshine each other, but after a week or so we talked about it and realized that it’s not a competition anymore, we each shine in our own ways, and we need to work together to take over the world.”

“Now it’s like living the dream with your friends by your side,” explains San Diego-bred Chrystina, 20. “We get to laugh, sing and dance together. It really is a dream come true.”

That dream can be heard on “Like Me” and “Stupid Shit,” the first two Girlicious tracks, and the first taste of what can be expected from the girls’ full-length debut, which will be released in June 2008 on Geffen Records. “Like Me” is a Jazze Pha-produced urban-pop gem that is guaranteed to melt radio waves, the smooth-as-silk vocals popping from a thick, deep groove you can get low and “bump your booty to,” according to Tiffanie. “Stupid Shit,” produced by Beau Dozier and Stefanie Ridel (with Antin and Fair as Executive Producers), turns the heat up a few notches, flirting with raciness and a subtle raunchiness, and exuding an edgy sexuality that encourages you to “bang your knees, get low and booty pop.”

While Girlicious owe an obvious debt of gratitude to Antin and her Pussycat Dolls, they’re quick to point out that they are a very different group. “We look up to the Dolls and we want to be successful like them, but we’re different,” says Natalie, Chrystina adding, “Our quality is the same, but our style is different.” “Different styles, but still great music,” interjects Tiffanie. There’s a brief moment of silence, and Nichole says what all of America is already thinking: “One thing we do have in common with them? We’re really hot, too…”

Hot with a capitol T. And when you’re that delicious, you become Girlicious. 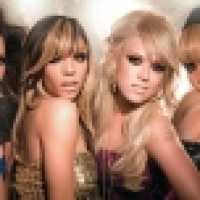