'Can I start again? In your own time, Ms Halliwell.

In May 1998, a 25-year-old woman walked out of her job, and it made world news. But then, it was quite a job. Geri Halliwell was cheerleader, rabble-rouser, bottom-pincher, pop advocate and larger-than-life cartoon character Ginger Spice in the biggest group of the Nineties, the Spice Girls. Yet when she quit, her future seemed uncertain. Some even said bleak.

But that, of course, was before her book If Only became a best-seller. Before her first solo album Schizophonic went platinum in Canada. Before the first single from that album made number two in the UK charts, to be followed by three consecutive number one singles. Before Geri proved that her success was no fluke and that she has an unerring instinct for what the girl on the street (and the boy on the dance floor) wants to hear. Because, of course, it’s what she wants to hear herself.

At a time when real pop stars are in short supply, Geri Halliwell is the genuine article. I’ve always loved pop music, she declares. “Pop became a dirty word for a while, but it doesn’t have to be crap. It doesn’t have to be manufactured, soulless, and heartless. There is soulful pop out there that is running on a heartbeat and a lot of fire and energy.

Growing up in Watford, Geraldine Estelle Halliwell’s early musical education consisted of miming to Madonna records in front of her bedroom mirror, listening to Abba, Michael Jackson, Wham and her dad’s collection of show tunes: Judy Garland, Marilyn Monroe, Shirley Bassey. And loving it all with a passion.

“Then I did a degree in pop, she laughs. “I was in the Spice Girls. And now I feel like I’m doing my thesis. All of that knowledge is poured into this album, and I’ve finally got the tools to be able to use what I’ve learned.

Her first solo album was made quickly, “Just to prove I could do it. I was running on ‘I’ll show you�more than anything. We all do that I’ve done it all my life. But this album’s different. This was very much a creative drive to explore. Vocally I’ve become a lot more confident. And I’m starting to realize that I am a real artist �that I can write pop songs, and do it well.

The album was produced by Rick Nowells (Sonique, Texas, Dido), Stephen Lipson (Pet Shop Boys, Ronan Keating) and Absolute (Tina Turner, Spice Girls), and crafted with a variety of writing partners from Europe and the USA. But no matter who the collaborators were, the end result is unmistakably, consistently Geri: the lyrics, the music, the production, the videos and even the image on the sleeve all reflect her creative input and powerful personality.

In all the column inches written about Geri in the past three years, it’s easy to forget that this is what she does: loud, proud, glorious pop. Music with a heart, soul and great hooks. So forget the weight loss, the friendships with George Michael and Robbie Williams, the yoga, the shopping, the gossip and the pictures. If you really want to know the truth about Geri Halliwell, then play her records: she’s in every beat. Playful, romantic, sexual, spiritual, egotistical, funny, thoughtful, contradictory �but always warm, honest and likeable.

So far, it’s been one hell of a roller-coaster ride. And now it’s time to go round again. Scream if you wanna go faster. 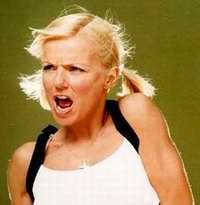