You did your Elvis dance to Faith at college-leaving do. Father Figure was on the Breakfast Show the morning you started work. You played Kissing a Fool on the first night in your own flat and I Knew You Were Waiting and Monkey while you wallpapered the back bedroom. There was Waiting For That Day when she moved in and Heal the Pain when she moved out. Cowboys and Angels is on tape you make for the car and if you've had a couple of drinks you can muster a pretty good version of Freedom, even if you say so yourself. You were off your face the night you disgraced yourself to Too Funky and Spinning the Wheel was left on your answerphone the night you were unfaithful. A caring soul sent you a copy of Older when a close friend died and You Have Been Loved still makes you cry. Probably always will.

"It feels good just to know that you are a small part of the soundtrack to people's lives," says the songsmith modestly as he waits for the kettle to boil in the kitchen of his North London home. For most of us the last decade has been a time of growing wiser and wider. For George Michael it's been 10 years spent making deeply memorable music and truly terrible tea. You first met over 10 years ago. Wham! was all over, you could say he was just out of short trousers. But now he's grown up and has some startling facial hair to prove it. His aunt thinks the beard makes him look like Jesus; others reckon he bares a closer resemblance to Satan. The truth, he chuckles getting busy with a brace of mugs, is probably somewhere in between. But George Michael isn't the man you think he is.

The first surprise is that he is neither in black and white or half shadow. He has an incisive, almost ruthless, intelligence and an unusually developed sense of self. But he laughs readily, swears like a Tourette's Syndrome trouper and enjoys nothing more than a self-deprecating joke. He is slighter and more finely featured than you imagined and as Woody Allen said, he has the most eyes you've ever seen. Everyone's got a bit of George Michael in them and I am no exception.

George is padding barefoot around a hotel suite in Amsterdam searching for a throat lozenge and talking more than he should. Last night, in full 'fairy biker' gear, he kick-started the European leg of his Faith tour. The performance was raunchily physical and the songs were astonishingly strong. They seemed to span thirty years of great songwriting - Faith's rockabilly pulse; the soul stylings of One More Try; the funky foundations of Everything She Wants and I Want Your Sex. Yet they were all written by George Michael .

"It's a fortunate position to be in," muses their author. "To be 24 years old and be presentable whilst still being able to write songs for a much older age group. Those two things have fought each other all the way." The tour seals George's fate as Britain's most successful solo artist but comes perilously close to breaking his spirit. "I genuinely thought, 'This is when it happens. This is when you lose it'" he recollects with a small shudder. "Do you know, I spent almost that entire year in sunglasses? I just couldn't make eye contact with strangers. I think I even went to bed in them."

In a West London studio surrounded by what Joan Didion described as 'the ominous blinking electronic circuitry with which musicians live so easily live', George is working on Listen Without Prejudice Vol. 1. "I was trying to get rid of what I'd done with Faith." he explains later. "I think stylistically, although the songs are really good, I'd wandered off my natural path. Also I was too concerned with criticisms of my earlier stuff and that lead me to make an album that I thought maybe rock critics would have a more sympathetic view of. So there were lots of acoustic guitars and much more natural instrumentation and I was trying to emulate certain things that were too white in origin for me to really be comfortable with. I can't truly express myself fully without some R&B influence and with Listen Without Prejudice I drifted away from the black elements of my music." Listening to him you'd have thought he had made a less than magnificent album.

We are sitting at a table in George's front room. The house is sparsely furnished and discreetly decorated. "In popstar terms," he says, "this is a hovel." We are surrounded by the paraphernalia of bachelor life. You have to move a pile of CDs to sit down. This time we're eating biscuits with our tea and George has an announcement to make: he doesn't want to deal with the trappings of superstar success anymore. No more videos, no more promotional activity. This will be his last interview for a long time. "The same thing that makes everybody look when I walk into a restaurant will actually keep fuelling my career," he predicts. "A fascination combined with a lack of availability." Then he shuts up. "I won't be talking again until I've got something to say," he insists. "I'm going to sort of disappear. I want to get my life into line." He's as good as his word. At 27, he all but withdraws from public life. Only Hippy, George's faithful Labrador, knows what his master is up to. But Hippy isn't talking either.

Backstage at Madison Square Garden, decked out in an electric blue jacket and dark glasses, George is preparing to wind up his cover to Cover tour with two concerts in New York. He is doing so by nibbling a breadstick and telling his sister Melanie and cousin Andreas a mildly dirty joke. They both call him by his childhood nickname, Yog. His joke is useless. On stage that night he sings Superstition, Back to Life and Fame ('takes you down where things are hollow') and a skeletal, haunting rendition of his own Everything She Wants. He is far from useless. After midnight George hosts a party in a seedy downtown disco. His father Jack Panos is holding court in the centre of the room while his son dances in the corner to some sleazy funk. "I think he's fantastic," beams Jack proudly. "But then I'm biased." Around two, George slips behind the decks, like he used to do as a teenager in his dad's restaurant, and plays Anita Ward, Dee-Lite and Stevie Wonder. It's a blurred and brilliant evening.

George breaks a six year studio silence with Jesus To A Child, a desolate chronicle of magic and loss. Half-whispered words of remembrance hover above the fragile instrumentation like heat shimmering on a runway. This is followed three months later by Fastlove. Which manages to be both searingly sexual and desperately lonely. It will prove to be particularly poignant. Fastlove heralds the arrival of Older, an album whose songs describe inconsolable personal pain and gradual redemption. One reviewer writes: "If you recognise a rare talent for fusing truth and beauty in mainstream pop music, then George Michael is still your man." Within five months Older has sold six million copies without its creator having appeared on one magazine cover or television show. "Taking myself away from all those things that were screwing me up really worked," he says. "Now the music is my driving force rather than the insecurities."

Standing in the wings of a BBC theatre, George is more nervous than he's ever been. He adjusts his cuffs and runs a finger beneath the neck of his shirt, a picture of wracked anxiety. Then he takes to the stage and sings his very soul out. His interpretation of I Can't Make You Love Me is devastatingly beautiful. One More Try is one of the best vocal performances you have ever heard. Ever. In keeping with the evening's cool ambience George perches on a stool, Sinatra-like, for much of the show. "I'm not of a mind to go out and shake my arse around anymore," he shrugs. That said, he can't resist the briefest of frugs when the backbeat of Star People hits his funky G-spot. Afterwards, he says: "When you're singing in those situations something totally different, something that is normally safely locked away in the very depths of my being takes over."

We're back at George's place, the kettles on again. He is in a reflective but positive mood. He takes a carton of milk from the fridge whose contents total a tub of taramasalata, half a bottle of wine and half a dozen cans of coke. The seat on his lavatory has snapped off but he doesn't seem unduly bothered. He says he has little interest in material concerns these days. "I mean, look at this house," he laughs. "It doesn't take a rocket scientist to work out that this isn't a huge extravagance. I've got houses in LA and St Tropez too but the three houses combined would fit comfortably into the average rock star's house. I'm not saying that to prove how modestly I live but I don't have a very expensive lifestyle and I've sold a lot of records." He has, in fact, sold more albums than there are human beings in Britain, but his is unimportant. Matters of the soul are troubling him more these days.

"What's more important," he asks, "to have a long and healthy life or to enjoy every day as it happens? I wonder if I should spend so much time worrying about the future. There might not be a future." He lights a cigarette; you've never seen him smoke before. There is a funeral card on the shelf. "Certain things have happened," he says. We discussed sexuality. More specifically his sexuality. He makes me laugh out loud when, exasperated, he exclaims, "Anyway, who really cares whether I'm gay or straight? Do they think they've got a serious chance of shagging me or something?" After talking for three hours he offers you a lift home. In the car he talks knowledgeably about the London music scene, Ecstasy, the British government, hangovers, even Buddhism. And as we drive, he sings along to the songs on the radio and you keep thinking to yourself, God, he's got such a lovely voice. He sounds just like George Michael. 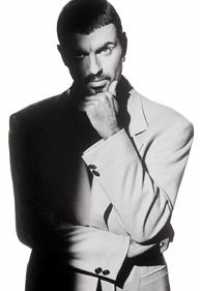