Up the creek without a paddle but we got Funkoars

Where's my beer? Cunt we drunk yours!

It's fucking Hunts of course putting runs on the board

Like Langer at a test match, I'm taking the best catch

I check out the face, the tits, and then snatch

I always wear a rubber so the eggs don't hatch

I needed some funk and Oar's had a new batch

I scored well for it and got amphetimized

Then crossed the Nullarbor to hang with Certified Wise

Hip hop's the only reason that I'm still alive

I'm that dude in the back of the club, slashed like fuck

With my head nearly touching my gut, throwing shit up

It's the Oars of funk and we just started getting drunk

The Funkorian's buff so keep rubbing if you're feeling me

Ain't a cat alive dumb enough to test us

I serve you the two round two through John Edwards

My style is wrecking mics and stylists

My rhyme moves the hearts of tarts like Saconian diamonds

Like a face lift, mistaken if you fake it

Face it, we rock the place like sumo weigh ins

Hons will pull your car like a fucking street magician

Raps are that fat my punchlines develop fucking stretch marks

It's the Oars and Hunter

Full of drunk mother fuckers, down the pints 'til we chunder

Sucker, we bust through and crush crews

The Funkoars get rotation like we released a bus loop

Never sell out cause underground groupies give head better

So make way for the mad sketchy cunt

I'll test your luck when I'm gripping a mic

Never brag, never had to

After a bottle of Johnny couldn't stop me

I rap here or Perth, Melbourne or Sydney

Never rap for the attention, I'm here to get her tipsy

See, I'm gonna need a hand in Canberra and I don't even want to be able to stand up

Don't aim when I piss but I rap when I'm pissed

Slight laminated lyrics but I'm still able to rip it up

You need a lesson in rap, I'll show you how Oars keep it raw

Only sell out here's the crowd 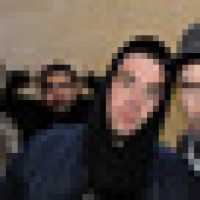