Frank Zappa was one of the great iconoclastic musicians of the 20th Century. He was born in 1940 in Baltimore where his Sicilian-born, Greek-Arab meteorologist father was employed by an arsenal that manufactured poison gas during World War II. The Zappa family eventually settled in Lancaster, Calif., a Mohave Desert town Frank called a cultural wasteland. Ironically, it was here, during his high school years, that Zappa's interest in outlandish combinations of music bloomed. He formed an R&B group called the Blackouts, he bought Stravinsky and Varese records, he played drums in his high school band, where he was introduced to 12-tone music and did some composing and conducting. And he began to suspect he was destined to live a life deviating from the norms of Americana.

Zappa recorded parody and instrumental doo-wop tunes in the early '60s and leased them to record companies like Original Sound in Los Angeles. His first record of note was Memories Of El Monte, released under the name the Penguins. From there he joined a bar band, the Soul Giants, as a substitute guitarist. He transformed this cover group into the Mothers of Invention, his seminal band of mid-'60s renegades and freaks that negotiated the twists and turns of his experimental and distinctively weird rock music. He said he never had any intention of writing rock music. Instead he desired to compose more serious music and have it be performed in concert halls, but since rock paid the bills, Zappa charged into the pop arena with rebellious ideals.

Instead of lulling listeners into a pop music stupor, Zappa challenged his audiences to think. Segueing from juvenile jokes and profane commentary, Zappa and company would play poignant songs like "Plastic People" (from 1967's Absolutely Free album). That tune in particular not only helped spawn a countercultural generation of authority-questioning American youth but also became an underground hit and cry for freedom in Iron Curtain Czechoslovakia.

Zappa first appeared in the pages of Down Beat in 1969 (he later graced the cover in 1978 and 1983). That same year he disbanded the Mothers, not long after the group played a series of East Coast dates on a package tour with Rahsaan Roland Kirk, Duke Ellington and Gary Burton. On his own, Zappa began recording a massive catalog of work with a diverse and ever-changing crew of collaborators and band members including George Duke, Jean Luc Ponty, L. Shankar, Johnny "Guitar" Watson, the London Symphony Orchestra, Pierre Boulez, Adrian Belew, Steve Vai, Yoko Ono and John Lennon.

With over 60 albums to his credit, Zappa adventurously punched out heady rock on his mean guitar and served up "jazz from hell" experiments on his computerized Synclavier DMS keyboard. With a lifelong flair for creating genre-jumping, post-modernist music, Zappa released albums that folded in several different styles of music, cross-referencing such seemingly disparate domains as classical with reggae and melodic R&B with dissonant avant-garde. The genius composer-performer lost a lengthy battle against prostate cancer on Dec. 4, 1992.

In 1994, Zappa was elected by the Critics into the Down Beat Hall of Fame. 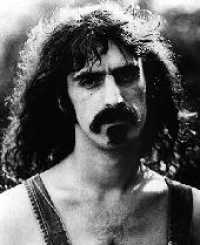