Everyone who listens to rap knows who Foxy Brown is. She has bothered and entertained hip-hop fans all over the world with her distinct style. Some say her style is similar to Lil' Kim's. However, they both have pretty much distinct styles. Lil' Kim seems to be a little less fashion-name oriented than Foxy, but they are still close.

Foxy Brown has been known for over a year in the world of hip-hop, yet has never released her own solo album. She has appeared in many songs as a guest star, but now her new solo single is out and she is on the way to being recognized as a real M.C. Her new album has recently been released, with good guest artists including Blackstreet and Jay-Z, it is sure to be a hit.

Foxy always talks about Versace' shades, Lexuses, chillin' out with Columbians, and other fashion names, exquisite designer labels, and trips to exotic places. She is 17 years of age, and recently celebrated her birthday. Living in New York, she made her first appearance in LL Cool J's remix of "Who Shot Ya". Other guest appearances include Jay-Z's smash hit "Ain't No Nigga," Silk's remix of "Hooked On You," Total's "No One Else" remix, "Touch Me Tease Me" by Case, and several songs on Nas's new LP.

Foxy is a member of THE FIRM, along with other New York M.C.s Nas, Cormega, and AZ. They all made many appearances on Nas's latest album, and THE FIRM is currently working on it's debut album. Rumor has it that THE FIRM will be signed to Dr. Dre's new Aftermath Records label, but nothing is certain.

With the success of her new album and the huge commotion that Foxy has caused, you should keep on the lookout for this new rapper who seems to keep everyone interested with her fashion name-dropping rhymes. 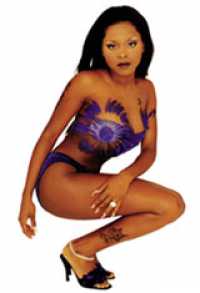