Worcester, Massachusetts. 8 pm. Those who have their hearts set on a Sunday night bingo game or knitting circle at the Quinsigamond Village Community Center will walk away sorely disappointed. Instead, nearly 600 kids spanning all ages and tastes have excitedly packed themselves into the tiny venue. The room is plunged into darkness and the wild shouting echoes in the air; this is the moment they’ve been waiting for. The first strains of Michael Jackson’s “Thriller” filter through the speakers as Four Year Strong take their hometown stage, fully prepared to shred faces, blow minds, and take no prisoners.

Alan Day (Vocals/Guitar), Dan O’Conner (Vocals/Guitar), Joe Weiss (Bass), Josh Lyford (Synth), and Jake Massucco (Drums) are Four Year Strong. At first, this may not raise eyebrows or drop jaws, but it is only a matter of time. Bringing a unique blend of brutal breakdowns and soaring choruses, Four Year Strong have cut their teeth into the Worcester hardcore scene and thirst for more. Their music incites a riot like nothing seen before, leaving live crowds and CD listeners alike simultaneously blown away, and fired up.

Their influences range from Lifetime to Saves the Day, Gorilla Biscuits to New Found Glory. “We just play exactly what we want to hear,” describes Dan, explaining their combination of hardcore and pop-punk. Sharing an average age of 20 years old, the five guys of Four Year Strong have already self-released an EP, making themselves known on the Smartpunk Top 100 sales and Purevolume’s “most played” charts. The band built their own stage sets, booked their own tours, and made music the way they want it to be made.

With this do-it-yourself determination, Four Year Strong do not pretend to be anyone but themselves. The band does not sugarcoat their image, avoiding the pretty-boy front that smothers the scene. Behind the numerous tattoos and grizzly beards, Four Year Strong are the kind of guys you would want to bring home to Mom and Dad. The band does not bother with egos or attitude, determined to connect with every fan on a personal level. 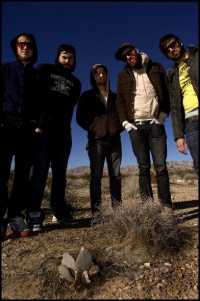