While he was drumming with Nirvana, Dave Grohl was recording original songs at home that never received public release. Those tapes would become the foundation of the Foo Fighters, the band he formed in 1995, after the death of Kurt Cobain. Like Nirvana, the Foo Fighters melded loud, heavy guitars with pretty melodies and mixed punk sensibilities with a sharp sense of pop songwriting.

Dave Grohl began playing guitar and writing songs in his early teens, as well as performing with a variety of hardcore punk bands. In the late '80s, when he was still in his teens, he joined the Washington, D.C.-area hardcore band Scream as their drummer. During the final days of Scream, Grohl began recording his own material in the basement studio of his friend, Barrett Jones. Some of Grohl's songs appeared on Scream's final album, Fumble. After Scream's 1990 summer tour, Grohl joined Nirvana and moved to Seattle.

After Nirvana recorded Nevermind, Grohl went back to the D.C.-area and recorded a handful of tracks that would appear on Pocketwatch, a cassette released by Simple Machines. For most of 1992, he was busy with Nirvana, but when the band stayed off of the road, he recorded solo material with Jones, who had moved to Seattle. The pair kept recording throughout early 1993, when Grohl returned to Nirvana to record In Utero.

Grohl had toyed with the idea of releasing another independent cassette in the summer of 1993, but the plans never reached fruition. Following Kurt Cobain's suicide in 1994, the drummer kept quiet for several months. In the fall of 1994, booking time in a professional studio, Grohl and Jones recorded the album that became the Foo Fighters' debut album in a week. Boiling down his backlog of songs to about 15 tracks, Grohl played all of the instruments on the album. He made 100 copies of the tape, passing it out to friends and associates. In no time, Dave Grohl's solo project became the object of a fierce record-company bidding war.

Instead of embarking on a full-fledged solo career, Grohl decided to form a band. Through his wife he met Nate Mendel, the bassist for Sunny Day Real Estate. Shortly before the pair met, Jeremy Enigk, the leader of Sunny Day Real Estate, had converted to Christianity and quit the band, effectively ending the group's career. Not only did Mendel join Grohl's band, but so did Sunny Day's drummer, William Goldsmith; former Germs and Nirvana guitarist Pat Smear rounded out the lineup.

The band, named the Foo Fighters after a World War II secret force that allegedly researched UFOs, signed a contract with Capitol Records. The band's self-titled debut, consisting solely of Dave Grohl's solo recordings, was released on July 4, 1995. It was an instant success in America, as "This Is a Call" garnered heavy alternative and album rock airplay. By early 1996, the album was certified platinum in the U.S.

Throughout 1996, the Foo Fighters supported the album with an extensive tour, enjoying a crossover hit with "Big Me" that spring. Late in the year, the group began recording their second album with producer Gil Norton. During the sessions, William Goldsmith left the band due to creative tensions, leaving Grohl to drum on the majority of the album. Before the record's release in the spring of 1997, Goldsmith was replaced by Taylor Hawkins, who had previously drummed with Alanis Morissette. The Colour and the Shape, the Foo Fighters' second album and the first they recorded as a band, was issued in May of 1997.

Smear left the group in the wake of the album's completion, and was replaced by guitarist Franz Stahl, whose stay proved short-lived; 1999's There Is Nothing Left to Lose was recorded as a three-piece, with ex-No Use for a Name guitarist Chris Shiflett signing on soon after.

In the Summer of 2002, Foo Fighters headlined Reading festival in England and released the brilliant album One By One. They followed the release of this with their first UK arena tour, which sold out in many venues. They received massive airplay for the saingles All My Life and Times Like These lifted off the album. One by One was number one in the Uk album charts for one week. During the recording of the album, Dave Grohl decided to scrap the tracks they had allready layed down and left to drum for Queens Of The Stone Age's Songs for the deaf album. He performed several live shows with them before returning to Foo Fighters and re-recording the whole album in a few days. Dave described it as the rawest album yet, and the best in his opinion. 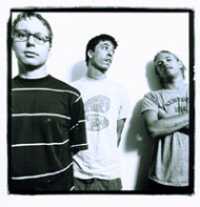