"Hello, Partland!" Flogging Molly's Dave King howled in his Irish brogue. "We're packed up ‘ere like a tin of fuckin' sardines!" He wasn't kidding. Kell's, styled after an Irish pub, had a stage fit for a quartet at best, but was forced to cope with the foot-stomping rush of the Irish folk-punk whirlwind packed upon it anyway. At times, eight people crammed onto the tiny stage to spew forth a brilliant sound fueled by equal parts Guinness, bile and joy. Kicking off with the aptly titled "Swagger," King gave a four count that set off an explosion of energy. The band played with such ferocity that they twice had to apologize to the wedding reception upstairs (not that they turned down any, mind you). Their foot-stomping tunes eventually smoothed over any rough feelings, for the happy couple ended up in the front row, pints in hand and cheering on this crew of mad bastards.

King was a slave driver, urging his band mates to ever more furious heights as they tore threw most of their two CD's worth of material. The entire band blissed out while playing with their eyes closed and leaning into the beat. Bassist Nathen Maxwell rocked back and forth, head back and grinning all night, while Matt Hensley waltzed lovingly with his accordion. Bob Schmidt and Dennis Casey, on mandolin and guitar respectively, spent most of the evening crammed into their corner of the stage, stepping forward to scream choruses in the general direction of their microphone. I couldn't see drummer George Schwindt, but from the sound of things he was definitely living up to the band's name (A bit of explanation: the band honed its skills by playing constantly at Molly McGuire's in Los Angeles, hence it's somewhat ominous moniker). After all, how many folk bands need to stop mid-set to replace a snare drum? At the center of this storm stood King, who strummed his acoustic guitar and attacked his microphone with such vigor that he told the audience that he would most likely knock all of his teeth out by the end of the night. The highlight for me was Bridget Regan, who switched between fiddle and a penny whistle and provided variation that kept the songs from melding into one another. All of the band members were clearly skilled at their craft and their constant touring has made them into a gelled, jigging juggernaut.

Although the playing was loose, the band didn't deviate heavily from the recorded versions of their songs. One ecstatic exception was "Black Friday Rule," which included a guitar solo by Casey that was so ripping it bordered on heavy metal. The band's energy level was so high that even slower material like "Laura" kept the crowd's heads nodding. The standout number was the ferocious version of "Delilah" which featured an extended, almost Latin middle section. By the end, perfect strangers had their arms around each other's shoulders as they swayed back and forth while belting out the chorus. Since the crowd was a mix of yuppies out for a Friday night and punks there only for the band, watching King conduct this motley choir was something to behold. After the bellowing crowd convinced the band to play one final song, King and crew finished things up with "What Made Milwaukee Famous, Made a Loser Out of Me." As the song began, Casey complained that he didn't know how the song went, to which King replied, "Come on, man, it's C and E like everything else!" This exchange summed up the night perfectly: with songs this much fun, who gives a damn whether you know how to play them or not since passion and Guinness will make up the difference. Three days later, I am still humming bits to myself and smiling. And I'm not even Irish. 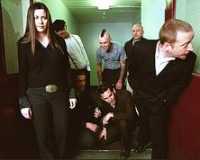