While other rock and rap giants pout and prophesize about the end of the millennium, Feeder closes out the ‘90’s with a blast, fueled by heart and a hangover. "This was a very natural record for us," says Grant. "After the creeping success of ‘High’ and an intense amount of touring we wanted to get right back in and go to work. I think I write better songs now. I think the key with Feeder in the studio is to capture the energy of the band, while you’re making sure it’s also about the songs. After all, we’ve lived them."

Their captures that rare combination of razor sharp rawness and confident songwriting, skidding along on the grind-it-out mechanics of Grant, bassist Taka Hirose, and drummer Jon Lee. "If you listen to one of our songs " says Grant "they have that classic kind of early punk intro, but with a melodic edge. The key is capturing the Feeder sense of urgency. Bands like Husker Du and Sugar had that kind of guitar quality. I like the occasional pop melody that balances it out."

The band has had plenty of practice honing their skills. One of the tightest pop threesome’s to come out of the Brit-rock scene (few bands "have gelled so seamlessly," Melody Maker also recently crowed) the group was formed in 1994. Grant clicked easily with drummer Jon (he and Grant hail from South Wales) eventually recruiting Taka from an ad in the British magazine Loot. Feeder soon signed to indie label Echo (Mono, Baby Bird and Moloko) in 1995, releasing their first effort, a limited edition Two Colours EP. But the rock world really came around when they released their mini-album classic Swim in 1996. Three singles followed, "Stereo World," "Tangerine," and "Cement," which eventually would compromise the bulk of the ground-breaking album Polythene, first released in England in May of 1997. One critic hailed the latter track, "Cement," as "Pretty much the most perfect four minutes of pop noise ever written."

The group also began garnering a loyal live following, with a large contingency coming form the burgeoning Great Britain surf/skateboard crowd. "We played anywhere we could," says Grant. "Seeing us live was a large part of the buzz, and still is, Thank God." Some live showcases in New York towards the end of ’97 created a stateside frenzy, and the band was signed by Elektra. "High" was added to the U.S. shipment of Polythene shortly before its release. The song became a cult classic, emblazoning the memorable teen soundtrack Can’t Hardly Wait, checking in as one of the most requested radio songs of the summer of ’98. The group also logged more U.S. shows last year, more than a hundred, then any other British band.

After holding their own on a myriad of bills with bands as varied as Everclear, The Foo Fighters, REM, Bush, and more, the group was ready to hit the studio and demonstrate the amazing growth of the band. "I produced it with the band, basically out of necessity. A lot of the people we wanted to work with were tied up on other projects. But the outcome was that I think we kept it simple, in a good way. Straightforward," says Grant. "I think the key to a good record is a bit of timelessness. Something you might want to listen to in five or ten years. I hope we captured that."

One song that Grant is particularly partial to is the ethereal wind-up of "Tinseltown." "Again, we stripped things down. It has that movie type of feel, a great track to play while you’re driving. It pulls you up, as your waiting for that big chorus." Feeder’s knack for jagged melody can also be heard in the blistering "Insomnia," and the more thoughtful "So Well," a counting-down-the-days account of the fragility of time, done with an understated Lennonesque brusqueness.

"It’s gonna break, gonna crash, gonna fall down and smash," sings Grant, in the kind of knowing tone of someone who also realizes the fragility of his day job. "We kept it simple," he invokes again. "Painfully simple." 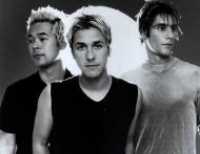