When Fantasia was a teenager, she got pregnant and dropped out of high school. When Fantasia had her baby girl people doubted her and said she would not be able too support her and her baby girl at all. But she got a job and struggled to get the things her baby needed such as diapers and clotihes. A couple of years later Fantasia thought too herself that when her baby is in high school and she wanted to see Fantasia's diploma, and Fantasia said she did noit have one, she wondered what kind of example she was setting for her daughter. So Fantasia went back to school and got a diploma . And proved everybody wrong. She tells teenage mothers who drop out of school to dont give up. Today her little girl is four and is in kindergarden.

Even though millions of people voted Fantasia Barrino as their American Idol, the singer admits that there was a time when she doubted America's fondness for her.

"Towards the end, I didn't think I was going to win, when it was me and Diana [DeGarmo]," the 20-year-old told The Associated Press in a recent interview.

Some of that skepticism crept into her psyche after fellow contestants Jennifer Hudson and La Toya London got the boot. Public discussion centered on whether voters would pick another black singer as their champion. Even Elton John chimed in that their low-vote tallies were racist.

"I didn't think I was going to win," she said. "I don't know why I was thinking [that]. Black people support [one another], but I was like, 'They probably ain't on the phone. [White people] are going to support their peoples.' "

Any concerns about her universal appeal were squashed after she won the contest this year with a 1.3 million-vote edge over DeGarmo.

"Every nationality would come up to me and say, 'I voted for you. I love you.' So I stopped thinking like that," she said. 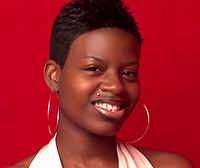