You don't go from being reared in New York's Bed-Stuy-housed Bevroot projects to being recognized by Rolling Stone and MTV first time out - without a story to tell. Fabolous's grand entrance into the rap world began with some impromptu flow outside the PJ's, which led to a hastily arranged audition for music-biz mogul, mixtape king DJ Clue in early 1998. The only catch was that the laid back linguist would have to impress Clue while kicking it live for thousands of New York radio listeners tuned in to Clue's Monday-night Hot 97 show. Add the fact that CNN's Noreaga was in the studio, and you're probably looking at more game than you can handle.

Not if you're the then-18 year old Fabolous. "I usually don't let anyone on the air unless I heard them first," says Clue. "But he lived up to his rep." Blessed with uncanny metaphorical ingenuity - and what just might be the most enticing sneer since Elvis - the charismatic rookie took the unforgettable night all in stride - including his now-legendary rhyme exchange with Noreaga. "I was living in Brooklyn with my moms," Fab remembers. "And my manager said I was going to get an opportunity to flow on the air. I wasn't even that interested in being a rapper back then. But I knew it was a chance." He also knew that DJ Clue was instrumental in the careers of some of hip hop's biggest names, including DMX, The LOX, Notorious B.I.G. and Foxy Brown - showcasing them on his coveted mixtapes. "I saw it as my shot to shine. But there wasn't really that much time to be nervous. I had been making up some rhymes that afternoon but by the time I got to the studio I forgot one of them. Luckily, I didn't have to battle Nor
eaga or anything like that. It was like he'd get on a beat and then I'd get on one. I made up the rest of the sh*t on the spot. I took advantage of the opportunity, that's all."

The freestyle-fest led to Fab getting premier placement on other mix-CD's, and a slot on the 50 city Hard Knock Life Tour. Clue and his partner Duro would eventually sign him to his Desert Storm imprint. Meanwhile, Fab began to bubble on other projects as well, including some much talked about Roc-A-Fella releases, and a star-making guest slot on Lil' Mo's chart-topping "Superwoman Pt. 2." When Desert Storm partnered up with Elektra Records, the stage was set for one of the most anticipated hip hop releases of the year, Fab's searing debut effort, Ghetto Fabolous.

"The streets heard of me from the tapes and stuff," Fab said. "I been holding it down on the freestyle tip. With Lil' Mo's video they got the visual." It's no surprise then, that entertainment powerhouses like MTV and Rolling Stone soon would jump on the Fabolous bandwagon. MTV branded Fab's first video "Can't Deny It" an immediate buzzworthy clip. Rolling Stone cited him in their summer Hot Issue as THE new hip hop star to watch. Said the mag: "Fabolous is" one hip hop phenom who flaunts his sex appeal along with his rhyme skills.

The proof, of course, can be found on Ghetto Fabolous - a kinetic/phosphorescent party album laced with Fab's custom made hood lingo. "It's straight fire," Duro said. "We're trying to create a good vibe where people can have fun."

Producer Rockwilder brings his sonic funk to "Get Right," where Fab plays off of Junior Mafia's "Players Anthem," exhorting listeners to "Grab your d*ck if you're gettin' right." The Neptunes produced "Young'n," a call-and-response club anthem, while "Ma Be Easy," produced by Just Blaze, finds Fab telling chickenheads to keep their hands out his pocket. Fab's mentors, Duro and Clue, helm the scalding "Keepin' It Gangsta."

On "Take You Home," Lil Mo sings the chorus Lisa Lisa made famous 16 years ago with "I Wonder If I take You Home," and Nate Dogg lends his subdued serenade to Ghetto Fabolous' smash first single, producer Rick Rock's rough-riding "Can't Deny It."

Fabolous' peers are indeed checking for him. He rhymes on Mariah Carey's remake of "Last Night a DJ Saved My Life" (Rolling Stone raves again, saying: "he steals the show" on the remake) which appears on her upcoming album, and he also lends his talent to Jimmy Cozier's "She's All I Got" and Mary J. Blige's "Family Affair." "Lil' Mo's joint made everything easier," said Fab. "Now everybody wants to holla."

With Fabolous kicking off the Elektra/Desert Storm union, Duro is confident the new relationship will quickly make its mark on the hip hop business. "We wanted to make sure they are as excited about the project as we are. We weren't looking for any bandwagon, we wanted to start from scratch. A lot of people was like, 'We're the hottest camp, we're gonna make you hot.' Elektra was like, 'We can do this together, we're really feeling Fabolous.' "

Fab's wink-and-a-nod thug persona, coupled with his acclaimed guest shots on other artists' work have made him one of the truly original mic specialists to emerge form the ever-widening sea of sound-alike rappers. "I never expected all this attention or even dreamed about it," he says. "I used to just rhyme for fun. Or maybe change other people's rhymes around and make them funny, or something like that. Now I rap about everyday things and just try to perfect my style."

When asked to define that style, Fab smiles.

"It's the Ghetto Fabolous style, that's all." 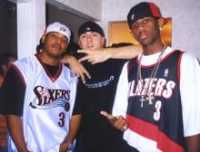