This album is the first LL Cool J album since G.O.A.T. to have the parental advisory label for explicit lyrics.[citation needed] LL said in an interview with Chicago radio personality DJ Z that the vulgarities are not heavy and the edited version has alternate lyrics rather than simply omitting the vulgarities. [1] LL and DJ Kayslay teamed up to release his first mixtape as a prelude to Exit 13 titled The Return of the G.O.A.T..

The first official single, "Baby" featuring The-Dream was released on July 1, 2008 to the iTunes Music Store. On August 19, 2008, iTunes released the rock remix featuring Richie Sambora, with a rock rhythm and sped-up lyrics.

The second official single, "Feel My Heart Beat" featuring 50 Cent was released on August 26, 2008. The song did not enter the Billboard Hot 100. The official single version of the song was leaked to the Internet on November 27, 2008. 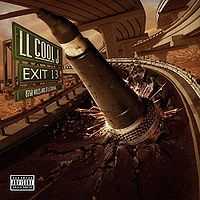