Everything But The Girl

As teenagers during the post-punk years of the early 80's both Ben (b. London 6.12.62) and Tracey (b. Brookmans Park 26.9.62) were signed separately to London independent label, Cherry Red - Tracey initially with her first band, Marine Girls, Ben solo. After a clutch of critically acclaimed and chart-topping independent releases on the UK Indie scene including two Marine Girls albums, a collaborative single (using the name Everything But The Girl for the first time) and their respective minimalist solo albums A Distant Shore (1981) and North Marine Drive (1982), the pair finally shelved their other projects and signed as Everything But The Girl to the fledgling London label Blanco Y Negro (distributed by WEA) in 1984.

Three compilation albums appeared in the early 90's - Acoustic (1992, a mixed collection of 'acoustic' tracks for North America only, including all four songs from the UK No.13 hit single, Covers EP), Essence And Rare (1992, a Japan-only retrospective and rarities compilation) and Home Movies (1993, a non US/Japan retrospective compilation incl. hits and popular album tracks).

Since 1992/3 and Ben's lengthy recovery from an unexpected and near fatal illness, EBTG have returned to work with renewed dedication. 1994 saw the release of their seventh studio album Amplified Heart (1994) which garnered some of the best reviews of their career and then, a year later, spawned a massive multi million-selling worldwide hit with Todd Terry's thumping melancholy house remix of Missing - US Billboard Hot 50 No.2, UK No.3 (and Top Ten for over three months), Germany No.1, Canada No.1, Italy No.1 (for six weeks), and Top 5 in another six major European countries). EBTG played almost ninety concerts throughout North America and Europe in support of Amplified Heart and Missing, their longest ever run of touring. They performed both with a band and as a duo.

In the same period, Tracey sang lead vocals and co-wrote two songs (one with Ben) for Massive Attack's second album Protection (1994) and both she and Ben guested on dates on Massive's 1995 tour. Tracey also sang on Massive's recording of Smokey Robinson's The Hunter Gets Captured By The Game for the Batman Forever soundtrack album.

The rest of 1995 was spent dividing their songwriting time between spells in London and New York, and then recording EBTG's eighth studio album, Walking Wounded (1996) in London. The album, released in May 1996, has proved the most successful of their career so far, spawning four hit singles, Walking Wounded, Wrong, Single and Before Today. The album signalled the adoption of a whole new set of influences from the burgeoning dance and breakbeat scene - influences hinted at on their previous album, Amplified Heart, and furthered in subsequent work with Massive Attack and the remixes of Missing. Walking Wounded established EBTG as one of the few groups of their generation to successfully bridge the gap between the 80's and the 90's.

In 1999 Everything But The Girl released their latest album Temperamental. Building on the foundations laid during the previous few years, the album further explores the beats and textures of clubland. Centrestage is still dominated by Tracey's voice and the pair's lyrics, but the sound is bigger and crisper than ever before. The sound points downwards to a deep and soulful level of rich song-based dance music. Get on board... 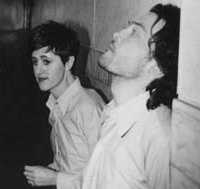