Etta Scollo was born in Catania, where she majored in Arts in high school. At the age of 18, she moved to Turin and began studying to become an Architect. She abandoned her studies, however, in order to devote herself to music completely.

She won first prize at the "Diano Marina-Jazz Festival", which was directed by Jazz composer Giorgio Gaslini. Around this time, she also attended a three-year course in singing at the Vienna Conservatory.

Between 1983 and 1987 she worked with artists such as saxophonist Eddie Lockjaw Davis, Sunnyland Slim and Champion Jack Dupree, both in the recording studio and in concerts. She attended singing seminars with artists such as Bobby McFerrin and Sheila Jordan during the same period.

Chance encounters with producers from the Pop music scene led to cooperations such the recording of the Paul McCartney song "Oh Darling", which Etta adapted with Italian lyrics. This song immediately shot to No. 1 in the Austrian charts.

In the 1990s she was busy in Hamburg where she, along with the musical Ensemble L'art pour l'Art (see also Palimpsest by H. J. Hespos), undertook experiments with contemporary music. She composed film scores – for example Come la pioggia for the film "Für immer und immer" (for ever and ever) by Hark Bohm and I tuoi fiori for the film "Bad Guy" by Korean director Kim Ki-Duk. Due to her musical tours and her albums Blu, Il bianco del tempo (Orbit Rec.) and Casa (Mongebel), she is one of the most popular Italian artists in Germany today.

Resident in Berlin und Sicily, she is currently devoting herself to composing and to exploring traditional music.

The success of her Canta Ro' symphonic concerts, which were performed as part of the Palermo summer Festival in July 2004 featuring Etta Scollo and the Orchestra Sinfonica Siciliana, conducted by Angelo Faja, has confirmed the contemporary relevance of Sicily's traditional music, which until then was known only to a limited audience.

The live recording of this project was awarded the «deutschen Schallplatten KritikerPreis 2005» and together with Canta Ro' in Trio won the RUTH-Preis 2007.

Around the same time, she went on tour with Les Siciliens, a performance documenting the dreams and reality, history and myths of her native island. From this, a live album was produced. In addition, she gave a concert together with Franco Scaldati und Enrico Stassi, La mia vita vorrei scriverla cantando – omaggio a Ignazio Buttita.

For the "Festival delle Orestiadi" in Gibellina ,she composed Il fiore splendente (Edel Classic), a poetical-musical project drawn from an anthology of Arabian poets in Sicily, published by Francesca M. Corrao.

The resulting CD was released in September 2008.
The project has been enriched by the much appreciated contribution of several outstanding figures of the international music scene, including Maestro Franco Battiato, cellist and composer Giovanni Sollima, Nabil Salameh, singer and leader of the multicultural band Radiodervish, the composer and Trumpet playerMarkus Stockhausen, the soprano Cécile Kempenaers and the actor and singer-songwriter Alain Croubalian. Il fiore splendente is also published in Italy (Edel Italia) France (Integral Classic) and USA (Allegro). 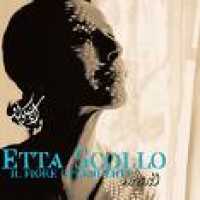