In the beginning, there was nothing... Some windy day back in 1990 Grutle Kjellson and Ivar Bjørnson met in their local rehearsal room, located in Haugesund (on the west-coast of Norway, between Stavanger and Bergen). They were playing in different bands at the time, Ivar in the trash-metal outfit Obnoxious (now, that's original...) along with amongst others Trym Torson and Grutle was just getting started with a Death Metal project along with Hein Frode Hansen. These three guys got together and decided to join forces. They got two additional members and PHOBIA was founded. PHOBIA did some extremely low-down Doom Death Metal with AUTOPSY and early DARK THRONE as the main influences. This band existed for a little over one and a half years. PHOBIA produced one rehearsal-demo entitled "The Last Settlement of Ragnarok" and a demotape with the juicy title "Feverish Convulsions".

Sometime early in 1991, however, Grutle and Ivar got "fed up" with the lack of progress and innovation and decided to leave and start something on their own. Their departure was the death of PHOBIA (excuse the pun), and Hein Frode Hansen left both the band and the city. He left for Stavanger and started Theatre of Tragedy. Even though ToT's music never really hit the top of our playlists, we've got to give him credit for this particular career-move.

Enslaved sees the light of day
So where were we? Oh yeah! Grutle Kjellson and Ivar Bjørnson were wandering the dark woods outside Haugesund in search of good ideas for their new project. Ivar's childhood friend Trym Torson was still rehearsing after Obnoxious got split up. So Ivar and Grutle asked him to join their new band. He accepted, and they started working on songs. It was soon to be clear that this would be no ordinary band. They had a feeling that this band would go somewhere. And I guess time has proven them more or less right, wouldn't you?

The next question was a simple one: what to call the band. As Ivar, Grutle and Trym where turning their minds inside out to come up with something, OLD FUNERAL came to play in ENSLAVED's "hometown" Haugesund. And coming with them where none other than Demonaz of the infamous IMMORTAL. He immediately came up with the right "answer": ENSLAVED (inspired from their song "Enslaved in Rot" from the IMMORTAL demo tape). Now everything was set, and ENSLAVED was ready to go. And they did...

First recording
After about 6 months of playing together Enslaved entered a small local 8 track studio,and recorded what was supposed to be a promotional tape.It contained 2 tracks of a weird mixture of both black and deathlike metal including a lot of experimental synthparts.The tracks however, were perhaps a little "over the top experimental", and the sound was awful. So, they decided not to release it. They didn`t even bother to mix it. Today, not more than perhaps 50 copies are left of this promo. But do not worry, you are not missing out on anything else than a few good laughs and a lousy productions.

Yggdrasill
After a little more than a year of making songs, trowing them away and rehearsing them, ENSLAVED went into the studios in the early summer of 1992. This trip to the studio resulted in a 5-track demo. It's name was derived from the core of Northern mythology; "Yggdrasill", and in retrospective it can easily be seen as the core of ENSLAVED's career. This demo still stands as one of the milestones from Norwegian Extreme Metal's violent childhood. In any case, "Yggdrasill" led to a record deal with the legendary record label Deathlike Silence Records and a reputation that grew to new proportions "over night". Still people are looking to find this demo. It was sold by the band members exclusively (by the good old ways of the underground mailing) and all copies were gone sometime early in 1993. However, it has later been re-released on a split-Cd together with SATYRICON (and their first demo). Check it out through Moonfog Records if you're interested...

Split-Cd's and candlelights in the dark
And Lady Fortuna did not stop smiling at ENSLAVED after that… The band immediately started working on material for their debut album. Sometime during this process Euronymous and Deathlike Silence Productions receive a phone call from some English chap by the name Lee, who was working on starting his own record label; Candlelight Records. He wishes to put out two Norwegian black/ extreme metal bands on a split-CD and two separate Mini-LP's, as his first release. Euronymous did not hesitate to recommend him ENSLAVED along with EMPEROR, who was also harvesting good words and praise for their debut demo. All this led to the release of the split "Hordanes Land"/ "Emperor", which today still stands as a classic and a "must" in every collection of extreme metal.

First album
Then came a time for the debut album.. It was recorded in Grieghallen, which was at the peak of its days of glory in this period. The album was mainly produced by Pytten, and with some assistance producing the drums from Hellhammer (MAYHEM), the result was "Vikingligr Veldi". It is worth mentioning that this album never were released were it was supposed to be released; namely Deathlike Silence, because of the tragic death that shook metal-Norway. But Deathlike Silence's Norwegian partner Voices of Wonder, decided to "come through" in order to have the album released. The co-operation between ENSLAVED and V.o.W. came to and end quite soon, and this conflict has not come close to being solved until our days. But it is believed that it could be solved with a little goodwill from both sides… Anyways, the album was released during early spring 1994, and ENSLAVED was seriously noticed in the international world of music. Today a lot of fans and people with extreme taste in general complain that they can not get their hands on "Vikingligr Veldi". The band itself have been wanting to get this re-released, but there is still some legal technicalities to be solved. As mentioned earlier on, things might be working out between V.o.W. and ENSLAVED some time in the future. That could mean a full re-release in its original and pure form, and a vinyl release, which the band is more than anxious to get their hands on themselves.

ENSLAVED goes frenchy and then frosty
French Osmose Productions did not hesitate to offer a record deal after this, and a new and long lasting symbiosis saw the light of day. Again Grieghallen became the scene of the crime. "Frost" was released in November 1994, and was to become ENSLAVED brake through to the "masses". "Frost" has in the aftermath been regarded as another turning point in the Scandinavian extreme metal tradition. It was with this album ENSLAVED once and for all engraved the genre Viking Metal into musical history. Today this genre has grown from hosting one to hundreds of releases being referred to as Viking Metal. With varying degree of seriousness and quality, if we may speak freely. "Frost" was followed up by a European tour; "the Winter War Tour", along with Osmose comrades MARDUK, during February 1995. This was a historical event; it was the second tour in history including the "new generation" of black/ extreme metal (IMMORTAL/ ROTTING CHRIST/ BLASPHEMY was behind the first one). "Frost" is still today being bought and enjoyed by cascades of old and new fans of ENSLAVED.

A long wait... then a return in fire
After three releases in one year, it may have come as a surprise to some that they had to wait three years for the next release, "Eld". This was mainly caused by the change of drummer. Trym Torson disappeared from the picture (he later on showed up again in EMPEROR), and Harald Helgeson appeared. "Eld" was released in 1997, and soon became a cult album, even though it might be considered to be less available than the previous albums. This time ENSLAVED moved somewhat away from the monotony and simplicity, in favour of more complex and progressive elements. Grutle's further development of the "clean" vocals was always strongly noticed. Even some psychedelia sneaked its way into a place or two. These was only to be a preview of what was to come..

More drummers leaving, and a permanent line-up emerging
After "Eld" Harald Helgeson disappeared from the band too (he is now in THUNDRA). .. Rescue was not far away, though! Before the "Eld" tour in March 1997, ENSLAVED recruited Dirge Rep (drummer in GEHENNA at that time) and R. Kronheim (known from 70's-rockers SUBTITLES) as session members. What happened was that the tour and the social aspect went so well, that they both were offered a "full time engagement". And as the visionary geniuses they were and are, they accepted and in time left their respective bands in favour of the ENSLAVED-collective. The first thing to be released with a new, complete and everlasting line-up was "Blodhemn" (1998). Again the band sent shockwaves throughout the world, this time with a bloodbath in the shape of an album. The melodic, progressive elements were set aside to make way for a blinding pace and riffs soaked with violence. Later on this album has been referred to by ENSLAVED's members as "the blow-out of the ages". 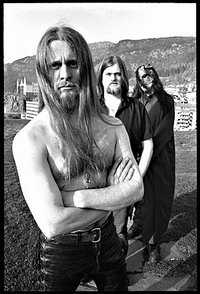