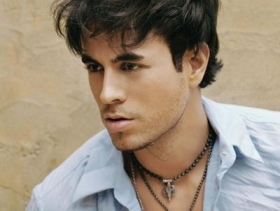 Listen to this new leak from Enrique Iglesias' upcoming bilingual album "Euphoria" - in stores on July 5. Behold the RedOne-produced "Heartbreaker". Mid-tempo recording with cool beats where the Spaniard suffers the tragedy of getting his heart "broken" by some girl. This is song number 3 we hear from Enrique's forthcoming LP and so far I gotta say all tracks have been acceptable and/or good. So I'll definitely give his "Europhia" record a chance with a full listen. Just one week left until it is available for purchase.

In other news, Enrique performed his latest single "I Like It" on GMTV in the UK on Monday morning. Seems he was using an auto-tune enhanced microphone. Performance was alright. The new single may not had kicked off with the "right" foot but just a couple weeks after its release it has peaked now #26 on the Billboard Hot 100 in the USA. And today, June 28, is the official release of "I Like It" in the UK, but the song is already within the Top 10 on the local iTunes. Possible #1 for Enrique in British lands?