Marshall Bruce Mathers III was born in Kansas city, Missouri on October 17 1973 to his mother Debbie Briggs-Mathers and his father Marshall Bruce Mathers II. Debbie was only 15 when Marshall was born. Not long after Marshall was born, his father packed his bags and left the family, never to be seen again. This wasn’t the end of a tough run for Marshall and his family; it was only just the beginning. Marshall got moved around to different houses and because of this he attended many schools. His mom finally settled down in a house in Detroit. Marshall was only 12 years old. The maximum time he spent at the one school was 3 months. He got bullied at every school he attended and later got back at them by dissing them publicly in his songs.

Marshall did pretty well in school considering the circumstances until he got to year 9. He failed for the third year in a row and decided that he had had enough. School just wasn’t for him, so he left to work on what he was most passionate about: rapping. He had been lip-synching to hip hop songs ever since he was 4 and if he wasn’t a comic book shop owner he had this dream to be a rapper. He started getting a name for himself when he was 17, even though he got into the rap game when he was 14. He was using the initials from his first and last names to form his rap name “M & M” which later became “Eminem” because of his race, he got rejected by people all the time, even though he was a really talented rapper. Determined to prove everyone wrong, he forced himself to go on radio shows and participate in freestyle battles. In 1995, Marshall recorded his first album titled Infinite, which only sold about 1000 copies. That same year, his high school sweet heart, now wife, Kim, gave birth to his only child, a little girl named Hailie Jade Scott.

Having nothing to lose, flat broke and in desperate need for money to support Hailie and Kim, Marsh set out to rave about his life in general where he caught ear of hip hops hard to please underground. Out of this came the Slim Shady Ep named after his alter ego. Em, down to his lest dime, participated in the 1997 Rap Olympics in LA aiming to win the $1,500 cash prize he badly needed. He battled for an hour throwing back every diss he was thrown and managed to get into the grand final. Unfortunately for Em, he lost due to a slip up. Furious that he had lost, Marshall didn’t even notice that he had been spotted by a few producers from interscope records, who got hold of his demo, Infinite. Dre eventually tracked him down, and recorded em’s second album, The Slim Shady EP then followed by The Slim shady LP, recorded in 19. Then in May 2000, Eminem worked with Dre again to record em’s third album, The Marshall Mathers LP. It featured artists such as Dre, Snoop Dogg, X-Zibit, Nate Dogg, D-12 and the beautiful Dido, who sings the chorus for “Stan”. This album debuted at number 1 on the US albums chart, and won three Grammys and was the first rap album to ever be nominated “Album Of The Year”, selling more than 8 million records in America alone. He stunned critics by performing his #1 hit single “Stan” with Elton John, shooting down all homophobic remarks.

Marshals’ album sales were skyrocketing but things weren’t going well with his wife Kim. A month after the Marshall Mathers LP was released, Em was involved in a brawl outside a Detroit club, where he allegedly pistol-whipped a man for kissing Kim. In august that same year, Em filed for divorce. In April 2001, Marsh was sentenced to 2 years probation, stemming from the weapons charge. This same year, he reconciled with Kim for his daughter, Hailies’, sake, but it only lasted for a few months, this time it was Kim who filed for divorce, in August.

2002 was a big year for Marshall. He branched out into the world of acting, filming with esteemed director Curtis Hanson. 8 mile was produced. Based on em’s own life, he played lead role of a character very much like himself, Jimmy Smith Jr. Jimmy is nicknamed “Rabbit” by his mother, Stephanie, played by Ems’ wife Kim. While filming 8 mile, he was busy during scenes making up the songs “Lose Yourself” and “8 Mile”. “Lose Yourself” was named the underdog anthem of the year.

As well as his first movie 8 Mile, Em released his 4th album, The Eminem Show. He revealed the more mature, slightly subdued side of himself. The Eminem Show fired some of his usual attacks on the likes of lead singer of Limp Bizkit, Fred Durst and Moby as well as fresh attacks on Osama Bin Laden. This one album alone had many hits, including Without Me, Cleanin Out My Closet, Sayin Goodbye to Hollywood, Sing For The Moment, Superman, and Business. He even sings on the album-on a song made especially for his daughter Hailie, the only girl in his life for whom he has respect for.

In 2004 Eminem produced a new CD "Encore". It featured songs such as Just Lose It, Like Toy Soldiers, Encore, and even Mockingbird which hit #1 in MTV's top 20 for over 10 days!

During 2005 there was a rumor that Eminem was retiring but Marshall cleared that up very quickly!! He told everyone that he wuz just taking a break from the mic which led to his newest cd "Curtain Call" released in December of 2005. Curtain Call has all of Em's favorites and also features 2 new songs. "When I'm Gone" and "Shake That (feat. Nate Dogg). When I'm Gone is about Hailie and how things are in her point of view. Shake That is just another typical Eminem song in which we all fell in love with!!! Lets just hope that Eminem returns soon because I know i am going to miss him!!!!! Hurry Back!!! 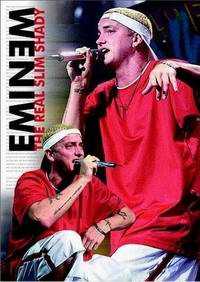