Edwin Frank Duchin was born in Cambridge, Massachusetts. Sources are divided as to whether his birth occurred on 1 April 1909 or 10 April 1910. He first became a pharmacist before turning full-time to music and beginning his new career with Leo Reisman's orchestra at the Central Park Casino in New York, an elegant nightclub where he became hugely popular in his own right and eventually became the Reisman orchestra's leader by 1932. He became widely popular thanks to regular radio broadcasts that boosted his record sales, and he was one of the earliest pianists to lead a commercially successful large band.

Duchin had no formal music training -- which was said to frustrate his musicians at times -- but he developed a style rooted in classical music that some believe the forerunner of Liberace's ornate, gaudy approach. Still, there were understatements in Duchin's music that were beyond Liberace's self-conscious glitz. By no means was Duchin a perfect pianist, but he was easy to listen to without being rote or entirely predictable. He was a pleasing stage presence whose favourite technique was to play his piano cross-handed, using only one finger on the lower hand, and he was respectful to his audiences and to his classical influences.

Duchin's 1938 release of the Louis Armstrong song "Ol' Man Mose" (Brunswick Records 8155) with vocal by Patricia Norman caused a minor scandal at the time with the lyric "bucket" being heard as "fuck it." Some listeners analyze the recording and conclude that there is no vulgarism uttered, while others are convinced that Norman does use the f-word (which would explain one of the band members laughing delightedly after Norman seems to chirp, "Aww, fuck it, fuck-fuck-fuck it!").

The "scandalous" lyrics caused the record to zoom to #2 on the Billboard charts, resulting in sales of 170,000 copies when sales of 20,000 were considered a blockbuster. The song was banned after its release in Great Britain. The notorious number can be heard on a British novelty CD, "Beat the Band to the Bar."

Duchin entered the Navy during World War II, serving as a combat officer. After discharge, Duchin was unable to reclaim his former stardom in spite of a brave stab at a new radio show in 1949. He died two years later, at age 40 or 41, in New York City, of leukemia.

Columbia Pictures, having enjoyed success with musical biographies, mounted a feature film based on the bandleader's life. The Eddy Duchin Story (1956) is a fictionalized tearjerker, with Tyrone Power in the title role. The film did well in theaters, and was well enough known to be referenced in one of Columbia's Three Stooges shorts: the Stooges' spaceship is about to crash when Joe Besser yelps, "I don't want to die! I can't die! I haven't seen The Eddy Duchin Story yet!"

An anthology of some of Duchin's best recordings, Dancing with Duchin, was released in 2002.

Perhaps Duchin's strongest legacy, however, is his only child. Peter Duchin (b. 1937), was the product of his first marriage (to Marjorie Oelrichs) and 14 years old when his father died, but the boy began a musical education with his father and eventually studied formally at Yale. In time, he became an orchestra-leading pianist in his own right, as well as the author of a series of mystery novels, a presence in high society (into which his mother had been born), and a frequent entertainer (as well as musical director for U.S. President Lyndon B. Johnson's inauguration) at the White House and on television. In his 1996 memoir Ghost of a Chance, Peter Duchin wrote about the wholesale fictionalization in The Eddy Duchin Story. 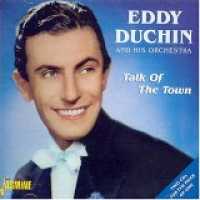