Eduardo "Eddie" Rodriguez (born March 11, 1959 in Havana, Cuba) is a former minor league baseball player and manager and the former 1st base coach for Seattle Mariners of Major League Baseball.

Rodriguez was drafted as a shortstop by the Baltimore Orioles in 1978 out of Miami High School and spent five seasons in the minors for the Orioles and California Angels.

He was then a coach and manager in the Angels minor league system from 1983-1993 before joining the Toronto Blue Jays organization as a minor league field coordinator, a post he held on and off from 1994-2000. He also served as third base coach for the Blue Jays in 1998. After a stint as third base coach for the US Olympics team in 2000 he served as a coach with the Arizona Diamondbacks, Montreal Expos, and Washington Nationals. He was the manager of the Seattle Mariners AA team, the West Tenn Diamond Jaxx, in 2007 and then joined the Mariners in his current capacity for the 2008 season. 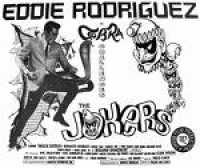