"I represent the Yay Area," raps the Yay (Bay) Area's E-40 in his typical lyrically innovative style on "Rapper's Ball" (featuring Too Short & Jodeci's K-Ci), the first hit single off the popular Vallejo rapper's greatly anticipated new album, Tha Hall Of Game. The collection never once disappoints with its sixteen tracks packed, or rather, sprinkled with Forty Wata's (A.K.A. E-40's) addictively fresh, ever-evolving lyrical flow plus a talent-studded cast of guest rappers and producers, including 2pac, Too Short, The Luniz, Suga T., Ant Banks, B-Legit and Tonecapone.

"I really put my heart into every song on the album. I had to because everybody is expecting me to come with some creative shit. I can't just come with no average shit, " said the veteran Bay Area rapper. His new release is his eighth to date--including all of his solo outings plus those with his ever popular family group, The Click (along with Suga T., B-Legit and D-Shot.)

For 1995 alone these included two albums: The Click's Game Related and E-40's solo In a Major Way, which firmly established E-40 as a major player in the rap game. This critically and commercially successful solo album sported wall-to-wall hits such as the single "I-Luv," the fast-paced "Smoke 'n' Drank," "Sprinkle Me" with Suga T. (which sparked everyone in the Bay to incorporate the word sprinkle into their vocabulary), "It's All Bad" with 40's son Lil E-40, who's also featured on the new album, and of course the ever popular, triple dope track, "Dusted 'n' Disgusted" where E-40 is joined by the best of the Bay: Mac Mall, Spice 1 and 2pac.

"When I first started out...that flamboyant shit was way ahead of its time," he reminds us on the album's powerful adrenaline-fueled opening track "Record Haters," referring to his early underground hit "Mr. Flamboyant." There, E-40 originally demonstrated his totally unique rapping style: a humorous rapid fireball delivery which enables him to condense sixteen words into the space that most rappers would just fit ten. (Note: E-40 himself cites as influences "Too $hort, a brother from Richmond called Calvin T, UTFO and KRS-One.") With 40's current popularity and the fact that today countless rappers religiously ape his style and vocabulary, it's ironic in retrospect to think that only five or six years ago, most folks wrote him off as "just plain weird." Of course historically in any artform this response is the norm for anybody who comes along and challenges the status quo. And that E-40 certainly has done!

In fact Tha Hall Of Game clearly marks E-40's continued growth as a true wordsmith who masterfully commands poetic license over any work or phrase that happens to cross his path. Ross Perot for example become Ross Perelli. Meanwhile P.H. (translation: Playa Hater) is cleverly transformed to become "P.H.I.V." "I use many different styles throughout the album," he offers of his wide vocal range. On "Growing Up" (with his eight-year-old son Lil E-40) he spits an aggressive revved up, robot-like, stutter style rap which he syncopates with a belch-like sound. Then on the apocalyptic "Circumstances" he spits out his maniacal rhymes in a crazed guttural style. Elsewhere on such slowed-down, laid back album tracks as "It Is What It Is" he delivers his lyrics in what he calls "my tired talk." Production-wise Tha Hall Of Game also boasts a most rich and diverse array of sound. "I deliberately wanted a wide range of quality producers," said E-40 of the album's instantly appealing grooves which are delivered by the likes
of longtime production associate Studio Ton (responsible for such irresistibly tasty, funk-laced tracks as "Keep Pimpin'"), Ant Banks, who produced "Rapper's Ball," and Tonecapone whose credits include the Luniz smash "I Got 5 On It." For proof of Tone's studio finesse, check the head-bobbing "Ring It" (featuring Spice 1, Keek Tha Sneak of 3x Krazy and R&B vocalist Harm,) a song which is already well on its way to becoming the voicemail/answering machine music of choice.

E-40 also made a point of including a couple of spoken-word cuts: "Pimp Talk" from Big Mike Tha Sheik and "Mack Minister" who he decribes as "my potna out of Frisco...a brother from the ghetto who does poetry and he's full of game." Just as with his previous releases, 40 also talks about what he knows best: the street and the lifestyle that goes hand in hand with it. "Million Dollar Spot" featuring 2pac, for example, he says, "Is about a place where there's illegal business.. It can be anything. Hooking up mobile phones. Slangin'. Or working with the Internet and doing white collar crime." Meanwhile on "Things'll Never Change, " the clever reworking of the Bruce Hornsby hit "That's The Way It Is," he offers a cold and sobering look at the realities of ghetto life.

Of all the album tracks, however, E-40 is perhaps most pleased with "Rapper's Ball" and how it just perfectly came together. "First Ant Banks came over with a track, which is actually 'Playboy $hort' (from '87) played over, before we had written any raps. Then me and Short, we had been trying to hook up for a least two years. As far as K-Ci, I've always been a big fan and it turned out he liked my music too...when we all hooked up in Cali, we all sat down together and just vibed. K-Ci came up with the hook. $hort came up with the idea of rappers ball meaning rappers be balling. We got in the studio that same day and we just hooked it up," said 40 of the hit lead single which has perfectly paved the way for Tha Hall Of Game.

Throughout Tha Hall Of Game, E-40 proved that he is truly one of today's few Hip-Hop innovators, a modern day bard who effortlessly (w)raps his tongue around his own brilliantly created vocabulary, transforming hard mob-style ghetto tales into visually vivid free-flowing rhymes that demand repeated listening. 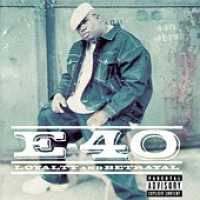