Self-reliance and musical integrity are two principles to which Dying Fetus have always lived by. The band formed in 1991, during the height of the death metal explosion of the early years of the '90s, and have matured into one of the premiere extreme death metal/grind-core acts to ever come out of the massive global metal underground. The band is recognized worldwide as a prime example of songwriting perfection, combining an innovative mix of technical virtuosity and catchy song structures to create the ultimate blend of death metal, hardcore, and grindcore. Intensity unparalleled, and musical power unrivaled, they are the leaders of the new generation in extreme music. Their sounds and lyrics are a brutal response to the everyday stress and pressures of reality in our age, but also provide the ultimate escape from it, through their music.

1995-First album (a compilation of the bands demo material from 93-94) "Infatuation With Malevolence" self-released, promoted and distributed. Dying Fetus tours the East Coast, performs and represents death metal as a genre on a panel at the CMJ music convention, Lincoln Center, NY.

1998-Third album "Killing on Adrenaline" released worldwide simultaneously on Germany's Morbid Records and in the USA through the band's own label, BLUNT FORCE Records. Dying Fetus embarks on unprecedented 9 week, 52 date North American/European tour, hitting 12 countries from Denmark to Spain and Belgium to Poland. Dozens of festivals and promotional undertakings performed, including co/headlining shows such as the Milwaukee Metalfest, Montreal Metalfest, German Morbid Metalfest, Ohio Deathfest, and the Superbowl of Hardcore. Dying Fetus has also appeared in hundreds of national and international magazines, and has performed hundreds of interviews in the international press. In addition, the band has also appeared on dozens of compilation cds, and consistently does radio and internet promotional activities in coordination with mailorder and distribution.

1999-Dying Fetus reissues the out of print "Infatuation with Malevolence" with extra tracks. The new version of the 93-94 demo collection contains 3 live songs from Germany recorded on the 1998 European tour, as well as one demo track not included on the previous edition of the cd. In addition to this, it has new artwork and is available exclusively from the band via their own label, Blunt Force Records.

2000-The latest release from Dying Fetus is a 6 song EP entitled "Grotesque Impalement". This is available in both cd and limited 12inch vinyl versions. The band again plays festivals such as the New England Hardcore and Metalfest, and the March Metal Meltdown II. DF also returns to Europe and plays in Germany, Belgium, and the Czech Republic. Included in this trip was a headlining spot at the Fuck The Commerce Fest III in Germany. The band will hit the road till the end of 2000, including tours in support of Destruction and Vader. The new album "Destroy the Opposition" will be available in September 2000 through Relapse Records, which will have eight new tracks done in the DF way. In December of 2000 Dying Fetus hits Europe once again with Morbid Angel, Enslaved, The Crown, Behemoth and Hypnos as part of the annual X-Mass tour.

2001- Dying Fetus does tours with All Out War, Diecast, Skinless, Gorguts, The Berserker, and others in support of Destroy the Opposition. Also band lineup changes occur as Jason, Sparky, and Kevin all leave band and Dying Fetus reforms under current lineup for summer tours and a new single recorded entitled "Vengeance Unleashed." 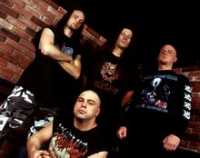