Duran Duran personified New Wave for much of the mainstream audience. And for good reason, too.

Duran Duran's reputation was built through music videos, which accentuated their fashion-model looks and glamourous sense of style. Without music videos, it is likely that the band's pop-funk -- described by the group as the Sex Pistols meets Chic -- would never have made the group international pop stars. While Duran Duran did have sharper pop sensibilities than their New Romantic contemporaries like Spandau Ballet and Ultravox, none of their peers exploited MTV and music video like the Birmingham-based quintet. Each video the group made was distinctive, incorporatin a number of cinematic styles to showcase the band as either part of the jet-setting elite ("Rio") or as worldly adventurers ("Hungry Like the Wolf").

While early videos like "Girls on Film" and "The Chaffeur" sparked controversy in England over their sexual content, their best-known clips were often based on hit contemporary movies. "Hungry Like the Wolf" uncannily recalled Raiders of the Lost Ark, while "Union of the Snake" and "The Wild Boys" brought to mind The Road Warrior.

The clever videos helped make Duran Duran's rise to popularity remarkably swift. Between 1982 and 1984, they rocketed from underground British post-punk sensations to teen idols. But their fall from grace was equally fast. By the late '80s, the group's lineup had fragmented, and the remaining members had trouble landing hist singles. Nevertheless, the group pulled off a surprising, if short-lived, comeback in the early '90s as a sophisticated soft-rock trio.

Inspired by David Bowie and Roxy Music, as well as post-punk and disco, schoolmates Nick Rhodes (keyboards) and John Taylor (guitar) formed Duran Duran in 1978 with their friends Simon Colley (bass, clarinet) and Stephen Duffy (vocals). Taking their name from a character in Roger Vadim's psychedelic sci-fi film Barbarella, the group began playin gigs in the Birmingham club Barbarella, supported by a drum machine. Within a year, Duffy and Colley both left the group -- Duffy would later form the Lilac Time -- and were replaced by former TV Eye vocalist Andy Wickett and drummer Roger Taylor. After recording a demo, John Taylor switched to bass and guitarist John Curtis joined the band, only to leave within a matter of months.

The group placed an ad in Melody Maker, which drew the attention of Andy Taylor, who became their guitarist, but Duran Duran were still having trouble finding a vocalist. Following Wickett's departure in 1979, a pair of singers passed through the group before Simon LeBon, a former member of the punk band Dog Days and a drama student at Birmingham University, joined in early 1980.

By the end of 1980, Duran Duran had become popular within the burgeoning New Romantic circuit in England and had secured a record contract with EMI. "Planet Earth," the band's first single, quickly rose to number 12 upon its spring 1981 release. Immediately, Duran Duran became the leaders of the New Romantic movement, becoming media sensation in the British music and mainstream press. The group's popualrity increased through their cutting-edge music videos, especially the bizarre, racy clip for "Girls On Film." Although the BBC banned the Godley & Creme-directed video, the single became the group's first Top 10 hit, setting the stage for the fall release of their eponymous debut album.

Duran Duran reached number three upon its release and stayed in the charts for 118 weeks. The band quickly followed the album with Rio in the spring of 1982. Rio entered the charts at number two, and its singles -- "Hungry Like the Wolf" and "Save a Prayer" -- became Top 10 hits. By the November release of the US-only remix EP Carnival, the band were superstars in Europe, but only just beginning to make headway in America. Their exposure in the US was helped greatly by the emergence of MTV, who put the group's stylish videos into heavy rotation. MTV's constant playing of the videos paid off, and "Hungry Like the Wolf" became a Top 10 hit early in 1983. Rio followed the single into the Top 10, eventually selling over two million copies.

Duran Duran-mania was in full-swing across America, with "Is There Something I Should Know" reaching the Top 10 -- it became the group's first English number one that summer -- and the group's first album climbing its way to number 10. Duran Duran capitalized on their popularity by releasing Seven and the Ragged Tiger in time for 1983's holiday season. The record hit number one in the UK and number eight in the US, spawning the hit singles "Union of the Snake" and "The Reflex," their first number one US hit and their second British chart-topper. The band took an extended break after completing their year-and-a-half long international tour in the spring of 1984. In November, they released the non-LP single "Wild Boys," which reached number two in the UK and the US, where it was added to the live album Arena.

By 1985, Duran Duran fever was beginning to cool off, and after the band completed the the title track for the James Bond film A View to A Kill, the group went on hiatus. Andy and John Taylor formed the supergroup the Power Station with vocalist Robert Palmer and former Chic drummer Tony Thompson in January, releasing their eponymous debut album in the spring; it spawned the Top 10 singles "Some Like It Hot" and "Get It On (Bang a Gong)." The remaining members of Duran Duran -- Nick Rhodes, Simon LeBon and Roger Taylor -- responded with their own side project, Arcadia, which released an album called So Red the Rose in the fall of 1985; the album launched the Top 10 hit "Election Day." Early in 1986, Roger Taylor announced he was taking a year-long sabbatical from the group. He never returned.

Several months later, Andy taylor also left, reducing Duran Duran to a trio. Late in 1986, the band released Notorious, their first album in nearly three years. While it was relatively successful, going platinum in the US and generating a Top 10 hit with the title track, it was noticeably less popular than their earlier records. For the remainder of the decade, Duran Duran's popularity continually declined, with 1988's Big Thing producing "I Don't Want Your Love," their last Top 10 single for five years.

The greatest hits album Decade was released late in 1989, followed several months later by Liberty, the first Duran Duran album to fail to go gold. By that point, former Missing Persons guitarist Warren Cuccurullo had become a permanent member of the group. In 1993, the band returned from a prolonged hiatus with Duran Duran, a mature, layered record of lite funk and soulful adult contemporary pop that became a surprise hit. "Ordinary World" and "Come Undone" became Top 10 hits in America, with the former reaching the Top 10 in the UK as well; the album itself climbed into the Top 10 in both continents and went platinum in America.

Not only did the record restore their commercial status, but it earned them some of their best reviews of their career. The group followed the album with one of their poorest-received efforts, the all-covers Thank You, that managed to go gold in America despite its negative reviews. While Duran Duran was recording the followup to Thank You in 1996, John Taylor left the band to pursue a solo career.

Warren Cuccurullo has since left Duran Duran to re-form his old group Missing Persons and Duran Duran has returned to it's original line-up with the return of John, Andy and Roger Taylor. 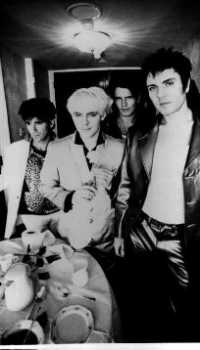