Welcome to a success story about to begin. What began as a pipe dream in a Minneapolis garage has evolved into one of the most exciting bands to come out of the Midwest. The Minneapolis-based ensemble blends the solid, piano-based songwriting of Sebastian Davin, with the power and energy of a great young rock band, whose members, sixteen year old guitarist – Seth Davin, bassist – Rob Burke, and drummer—Jake Englund create a unique sound and display a musical maturity beyond their years.

The piano fronted, Dropping Daylight, brings a youthful enthusiasm to the stage that can be described as nothing less than captivating. It is obvious to any crowd that these guys love nothing more than playing music. Each member brings his own influences, unique sound, and energy that combine to create something truly exceptional.

The band originally began as Sui Generis in the winter of 2001 with schoolmates Sebastian and Jake. Finding themselves disillusioned by the wholly unoriginal music flooding the airwaves, the two friends united to create something completely original and without equals. With this, the very definition of the Latin “Sui Generis”, the band was begun. When not at school or work, they spent their spare time recording their first full length CD, playing all the instruments themselves.

Once they felt they had something going they teamed up with school friend, Rob Burke. In order to help round out their sound, they looked to Sebastian’s younger brother Seth on guitar. Now fully formed, the band changed their name to Sue Generis and released that first CD in October of 2002. The band spent the next year playing club and college gigs around the northern plain region developing and honing their repertoire. In October 2003, they released their first full-length, full-band CD titled Back to Nowhere.

In 2004, the band showcased at SXSW in Austin, TX, creating a buzz that could be heard from coast to coast. Seems the industry finally awoke to their sound, and they spent the spring opening up for bands such as Jurassic 5 and showcasing for record labels and agents in LA and New York. Now, signed to Octone Records (Maroon 5, Michael Tolcher, and Flyleaf) in the summer of 2004, the band has changed its name to Dropping Daylight and is looking forward to a bright future.

Armed with a loyal, all-age, grassroots following (over 5,000 street team members), Dropping Daylight has exploded onto the national scene. Selections from their debut EP Back To Nowhere have appeared on MTV’s The Real World, and the band has performed with Nickelback, Simple Plan, Yellowcard and Midwest dates of the 2004 Vans Warped Tour. The band recently released their new EP, The Glenwood Sessions, and look for their “You Hear It First” spotlight on MTV2 in the New Year. This fall Dropping Daylight was part of the Suburban Curse Tour with Lucky Boys Confusion and is on tour with Unwritten Law this winter.

With the successful marketing strategy of Octone Records and the band’s unquestionable talent and motivation for success, it is only a matter of time before these four young men become a nationwide household name. The success story has begun. 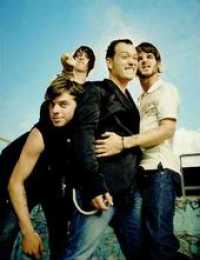