How would you feel if your first album was the next release from the skyrocketing Ruff Ryders label? DMX has six platinum plaques and counting; Eve's freshman effort has icy grey all over it; The Lox are poised to take over the charts; and, all of a sudden... center-stage is set for you. Well, 20 year-old hip hop lyricist Drag-On feels the pressure. However, twelve years of paying dues and hard preparation have him feeling like his platinum opportunity is now.

"It's my time... it's... my... time... I feel pressure, but I've been working hard at this. I paid my dues, I went on the Survival of the Illest Tour, the Hard Knock Life Tour, been on X's three albums, the Ruff Ryders Compilation and now I got my album coming out," declares Drag in a confident and reassuring voice.

But the outlook wasn't always so rosy for the next Ruff Ryder to blow. "I grew up in the hood," Drag-On narrates. "The Bronx. The projects. It was hard. I slept on rooftops and in trains when I had no place to stay. But all that made me stronger." Indeed, for most angry teenagers running away to escape their home, a quick excursion around the crowded streets and dark subways of the Bronx would give one a sudden change of heart. "A lot of people know what it feels like to have nothing.

But a lot of people don't know what it feels like to have nothing and nobody. It's a difference. You ain't got shit, and when you need something, there's nobody there but you. You got no choice but to die or dig yourself out of it." At this point, young Mel "Drag-On" Smalls chose to pick himself up by the bootstraps and, as a man of his words, embark on a professional career in the rap game.

Drag thinks back to his years as a young buck coming up on the rap scene, reminiscing, "I've been writing since I was 8 years old... we'd battle to see who could hold it down in ciphers." A fateful meeting with Yonkers' underground master DMX led to a more serious commitment to hip hop. "A few years ago my man bought me into the studio to meet X. Not many people could hold it down battling with X like I did that day." Shortly after winning the approval of DMX and the Ruff Ryders, Drag-On was signed to the Ruff Ryders label and began to create an ambitious body of work.

Some of his memorable moments include his verse on the "Ruff Ryders Anthem" remix, his duet with Cash Money Records sensation Juvenile on" Down Bottom," and his new joint "Spit These Bars" which is currently heating up radio stations everywhere.

These songs have led to some confusion as to where Drag is from, and the source of his lyrical influence. "I use different elements in my flow. I mix it. I mix the South in with New York, the West Coast in with New York. There's always gonna be New York in there," he reassures; "I write to the track. My whole accent might be different on one joint. I already got people thinking that I'm from the Dirty South. I'm just trying to make my own category."

Drag-on's style can also be attributed to his philosophy on the business of hip-hop: "You gotta study people's albums and think about the fans. You can't write for niggaz on the block any more," warns Drag. "You gotta think about your fans. You gotta write for people in the North, South, East and West. You gotta think universal and come from all angles." Drag-On sits on the verge of a major commercial success, but there remain old cohorts from the hood who might feel as though he has changed. "Some people on the block have changed, but I haven't changed. They've changed cause they're looking, they really watch me now.

They're waiting for me to say something, so they can be like, 'Oh Drag changed!' But I'm just gonna be me." For the haters, Drag has some choice words: "Niggaz that hate... deep down... they feel you. You're on their minds. You're impressing them.

You're doing something out of their league. It's good when people are talking about you. When people ain't talking about you it's a problem." As the world prepares for the upcoming Ruff Ryders / Cash Money tour, the Feb. 29th release of Drag-On's new album, Opposite of H2O and a planned Ruff Ryders movie, Drag looks to the futur 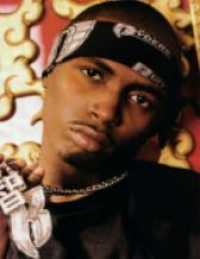